CHRISTOBIOGRAPHY: Memory History and the Reliability of the Gospels by Craig S. Keener - A Review 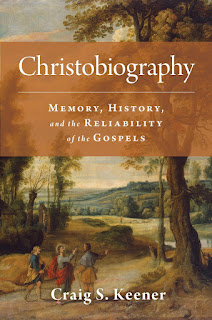 
AND THE RELIABILITY OF THE GOSPELS

It’s the second word in the title, memory, that first grabbed my attention. Then I noticed the word, reliability. Like many clinicians, I’ve administered many memory tests and discovered an incredible range of memory capacity. I've tested preschool children and senior adults. I used the best available tests covering a wide range of human memory. And, as a Christian thinker about integration, I wondered about the scant attention given to the role of memory and reliability in understanding the interplay between biblical texts and psychological science. So, I come to Keener’s latest cornucopia with considerable curiosity.

Craig S. Keener is professor of New Testament at Asbury Theological Seminary. Together, his works have sold over a million copies. He describes his scholarly vantage point as to the right of center. A scholar to the left of center would be someone like Marcus Borg.

This review is based on an academic review--I'll provide links to that below.

Christobiography is a lengthy tome of 743 pages! However, the text ends on page 501, and many pages contain footnotes that can cover nearly half a page. I read the work in five days and that includes making copious notes in the margins to help me remember key points to put in my review. I would note that Keener repeats many of his points and includes some details in the text that could be placed in an Appendix.

Christobiography consists of 17 chapters divided into five parts. At the risk of oversimplifying this considerable work, Keener demonstrates by reference to many examples that the synoptic gospels (Mark, Matthew, Luke) are more like ancient biographies than like fictional works (that is, ancient novels). The gospels also share some features in common with ancient historical works. These examples help set the stage for contemporary readers to be reasonable in what they should expect when they read the gospels. Following are somethings you will find in the five parts.

Part 1: Biographies about Jesus
Keener examines the differences and similarities among documents written close to the time of the synoptic gospels, which he places in the middle to late first century. This is where he concludes that the gospels are more like ancient biographies than like ancient novels. More specifically, the gospels are similar to biographies of sages or philosophers, which contain many of their sayings.

In both histories and biographies, the ancient authors had some flexibility in writing about events. They may structure the content in different ways but readers in that era expected writers to present history in a fair and honest manner. The gospel of Luke is close to a history especially considering the companion work of Acts; however, Luke also has much in common with ancient biographies.

Part 3: Testing the Range of Deviation

Keener assumes his readers have an acquaintance with the variations among the gospel accounts in terms of details and chronologies. He demonstrates such text variations were not uncommon in ancient biographies by looking at three biographies of Otho (c 32-69 CE). A reliable biography is one that is true in the sense of honest reporting about events that really happened. I think this quote helps explains what Keener means by true: “True” did not mean that audiences would expect chronological precision, verbatim recall, or precision on minor points.” (p. 259).

1. The miracle stories are unique and are not similar to other biographies.

2. The gospel of John is very different from the other three gospels.

Keener acknowledges the lack of ancient biographies of miracle workers before the gospels. He offers several arguments about the accounts of healings and exorcisms. For example, even today we find people in many cultures claim they have experienced or witnessed miraculous healings and exorcisms. To risk a paraphrase of Keener's argument, we can have confidence in the events reported as healings and exorcisms even if we do not accept the explanation that the reported results were caused by divine/supernatural intervention.

Keener provides a fairly detailed look at many similarities and differences between John’s gospel and the synoptics. He argues that despite John’s differences, the fourth gospel still appears to be an account of events similar to those expected in ancient biographies.

Part 5: Memories about Jesus: Memories before Memoirs
In part five, Keener demonstrates his acquaintance with relevant psychological studies documenting the fallibility of human memory and particularly the problems of eyewitness testimony, which is the likely source of information about the works and sayings of Jesus presented in the gospels.

Keener argues based on personal experience and psychological research that what people accurately remember and pass along in oral cultures and ordinary experience is the gist of an event. Dialogue may be paraphrased or reconstructed but is rarely verbatim. He notes an exception—anecdotes uttered by a respected teacher, such as Jesus, may very well be verbatim.

Keener invites readers to consider that Jesus' disciples, who had great respect for their teacher, might be more attentive to learning what Jesus taught than would be a casual observer.

He also notes that, in primarily oral cultures, students were expected to pass along a sage’s teachings as spoken. Ancient storytellers may have some liberty in retelling a historical event, but an ancient audience would not have tolerated variations on essential details. Once again, the gist remains the standard for stories in a reliable ancient biography.

Keener is clearly a conservative religious scholar, but I think he fairly addressed many of the reasonable questions one could ask about the reliability of the gospels. I agree with Keener that his arguments are not likely to convince highly skeptical scholars who are inclined to consider the gospels as works of fiction. I also agree with his belief that this book is not likely to be appreciated by those who insist that the gospel writers reported Jesus's words verbatim and that the variations in details such as chronology of events are of little consequence in a true account.

As a psychologist, I would like to have seen Keener use more primary sources when reporting memory research. He does cite Loftus, Nucci, and Hoffman (1998) but seems to rely on summary sources (e.g., McIver, 2012).

Reliability is a necessary but not sufficient condition for validity.

Therefore, I think we need another volume on the validities of the gospels. I use the term validities on purpose. Any use of a test or set of data (think gospel texts as data) may have a variety of valid uses, but there will be limits on what constitutes a valid use. Perhaps some Bible commentaries address the issue of validity. If you know of a scholarly work, that provides an overt link between reliability and validity, do comment.

Now, here's my comment on spiritual humility. Have you heard Christians pontificate about what people ought to believe and do in order to be a Christian? I dare say there are limits on flexibility on the concept, Christian. However, I venture to say that given the evidence of variations in the ancient words and phrases in the gospels and other biblical texts, it would be wise to be less arrogant in dictating what are mandatory beliefs and morals if such statements are based on a few ancient words or the interpretation of a phrase.

Sutton, G. W. (in press). [Review of the book Christobiography: Memory, history, and the reliability of the gospels by C. S. Keener]. Journal of Psychology and Christianity, XX, pp-pp. Accepted for publication September 16, 2019. See Researchgate or Academia