A Guide to the Most Controversial,

Book of the Bible

I agree with the authors that Genesis for Normal People is for those who want to a better understanding of Genesis without mastering Hebrew and attending seminary. I’ve thought about what I wish they had included but I’m neither a religious scholar nor a popular author so, I’ll offer a summary of the book and note some points worth considering. Depending on how much you have read about this old document called Genesis, you might learn a few things like I did or at least think about Genesis in a different way.

My plan is to present a summary of this easy-to-read Introduction to Genesis by focusing on the authors’ key points.

1. Genesis is an ancient Israelite story. To understand that story requires an appreciation of the Israelites who likely received it after returning from exile in Babylon some 2,500 years ago.

2. Genesis is the first in a series of stories about the relationship between Israel and God. The sequence of ten sections tell the Israelites how their ancestors struggled with God before ending up in Egypt, which leads to the next set of stories in Exodus.

4. The story of the first couple, their family, and their struggles is like the story of the nation of Israel, which will unfold in later stories. The Adam’s family plight includes recurrent themes of relationship, disobedience, and exile. Like Israel, the early family refused wisdom and thereby lost the blessings of life in the land God had prepared for them.

5. Cain’s story leads him further from God. So, the story of Israel continues down the line of Seth until the infamous flood.

6. Flood stories are found elsewhere in the area. The destruction is unbelievable and such events are seen as the consequences of disobedience.

7. The tower of Babel is a slam against their conqueror, the Babel-onians—those thorns in the side of the Israelites.

8. Abraham arrives on the scene. Like Israel after the exile, Abraham comes out of Babylon and enters Canaan. The struggle between Israel and God can be seen in the family struggle to find a way, outside the promise, to start a family. Like Adam following Eve, Abraham follows Sarah. And then there was trouble.

9. We meet Isaac the father of Israel.

10. We see another struggle between brothers. The younger one gets the name of Israel and, despite stories of deception, ends up creating the tribal leaders of this fledgling nation.

11. One of the young sons is a favorite and he suffers for it. In the end, this rejected and exiled Joseph ends up saving his family and in doing so, he saves Israel.

The book ends on page 152 following a short conclusion. After this, there is a leader’s guide to foster discussion of each chapter.

I’ve been told by others that scholarly writers who are writing trade books like this one should focus on one overarching theme and not write as if they are dealing with the issues of concern to scholars. It seems to me that something like this sort of advice influenced this book.

For whatever reason, the authors avoid the seething cauldron of life evolving out of the primeval swamps rather than being made by God and having to marry their cousins. They skip the curious sexual misdeeds—including that strange scifi-like account of supernatural beings mating with women that can prod the curious to wonder what kind of book this is. And they skirt the tantalizing story of Sodom and Gomorrah often quoted in the current concerns about same sex-sex and the church.

What these authors might accomplish is the creation of a first set of lenses to wear when reading ancient texts to learn how ancient Jews learned about God and their relationship to God. And that without such lenses, the past is too far in the distance to be seen correctly. Surely the lenses of modern historians and scientists will not serve to understand a series of stories heard by the remnant returning to their homeland after years in a foreign land full of foreign stories populated with someone else’s gods.

Enns, P. & Byas, J. (2019). Genesis for normal people: A guide to the most controversial, misunderstood, and abused book of the Bible, Second Edition. thebiblefornormalpeople.com

Discipline with Respect in Caring Relationships 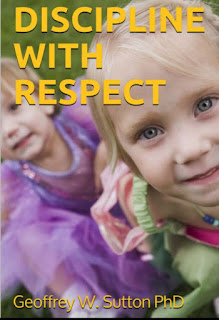 Discipline with Respect
in Caring Relationships

Discipline with Respect in Caring Relationships is an evidence-based approach to helping parents help children develop self-discipline. The program and the book has been well-received in public and private schools, churches, foster parent meetings, and other venues.

“With so many barriers to respectful communication, now more than ever parents need practical strategies to help their children develop into respectful adults. Dr. Sutton’s work connects timeless principles to modern wisdom in a way that challenges family habits and encourages relationship-grounded discipline.”

“Discipline with Respect meets many of today’s child-rearing needs. In it, Dr. Sutton conveys for parents and for other concerned adults his tested, effective methods for helping children to develop a sense of personal responsibility and self-discipline.”

“Discipline with Respect is informative, yet easy to understand. I recommend it highly. All parents have something to gain from such concise, practical reading.”

“I appreciated the section entitled ‘When Encouragement Seems to Fail.’ I have puzzled over why certain rewards work well with some students and not with others.”

Connect with Dr. Sutton at suttong.com

To schedule a presentation or workshop, write suttongphd@gmail.com

Discipline with Respect in Caring Relationships

Introduction: The Principle of Respect    9

Why You Should Buy This Book

What You Will Find in this Edition

What About Giving Allowances?

When Encouragement Seems to Fail

6. The Principles of Changing Behavior: Guidelines     127

How Society Tries to Change Behavior

Negative Consequences Should Be Fair

7. The Principles of Changing Behavior: Applications    143

Loss of Points and Repayment

Substitution at the Micro Level

Substitution at the Macro Level

Step One: Define the Problem

Learning to Let Go of Past Hurts

Available on AMAZON   and  GOOGLE worldwide