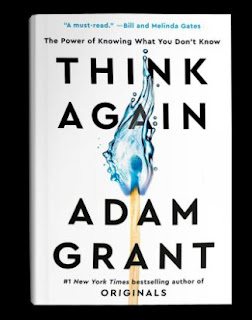 The Power of Knowing

What You Don’t Know

ThinkAgain works. Throughout the book, I found myself rethinking some of my assumptions and learning new applications of familiar and new psychological findings. In many ways, Adam Grant challenges us to rethink what we are doing at work, school, and even in relationships. It’s a book that deserves a place in any syllabus challenging students to think and rethink their assumptions and to develop confident humility. But Think Again also belongs in discussion groups in the workplace.

On a technical note, Grant divides the book into four parts followed by an Epilogue, and a more or less set of summary statements presented as Actions for Impact. The chapters are introduced with a poignant story. As the theme of a chapter unfolds, we encounter more stories and illustrations that help us appreciate the author’s point. You’ll find it’s like taking a course from a master lecturer with the added bonus that you can pause and think about the points. The notes are extensive and the index, comprehensive. Including the end matter, it’s only 307 pages but the conclusion ends on page 243.

There’s a lot to unpack in this book. I’ve focused on some of the salient points.

We learn about three roles we may take in arguing our opinions; however, Grant wants us to think like scientists, which is a theme repeated throughout the text. When we adopt the scientist role, we begin with doubt but have hypotheses. We collect data from experiments, which enables us to discover usable knowledge. Now about those other roles. As preachers we present our ideas as gospel and argue against different views by calling them heresies. As politicians, we are swayed by popular opinion instead of facts. As prosecutors, we are passionate about destroying other ideas instead of discovering truth. Throughout part 1 we learn to appreciate conflict as long as we are focused on information about how to improve our work on the tasks at hand rather than defending against interpersonal threats.

Here the focus changes on how we can interact with others in a positive manner by framing disagreements as debates and discovering ways to influence people who resist new and effective ways to solve problems. People are not easily persuaded by logical arguments with a long list of reasons why we should support a particular opinion. Researchers find that the weaker reasons gain the focus of those who want to reject the main idea. Thus, presenting a few strong reasons is often the best approach.

Also, it turns out that presenting two sides of an argument is not the best way to help others rethink a strongly held position. What works? Sometimes, the best method is to present several alternatives—that is, move from simplicity to complexity.

Catchy quote: “What doesn’t sway us can make our beliefs stronger.”

Grant encourages us to think about out community and promote lifelong learning. We learn how to promote rethinking at work by creating a psychologically safe setting where conflicting opinions can be offered without fear of reprisal. We find an example of a teacher who encourages children to rework their original projects based on peer and expert feedback. And we are reminded of the importance of rewriting drafts.

Grant encourages us to rethink our careers and plans rather than pursuing a vocation or life choice that isn’t working out. The problem with persistence in a failed enterprise is known as the “escalation of commitment.”

I began this post by recommending the book for students and people in the workplace. I can easily recommend it to retirees like myself. It’s rarely too late to rethink a course of action by examining the data of our lives and making new plans. As I write, the pandemic of 2019 as thwarted a number of plans. I’ve made plans based on what I know at this time. Flexibility is built into offers of wonderful adventures I can book. What strikes me is the importance of flexibility when pursuing a course of action.

I strongly affirm Adam’s theme of learning to think like a scientist. In graduate school, we were to be scientists first before applying scientific knowledge to helping people. The culmination of our work was to be an original experiment following strict rules of protocol. As a clinician, I encouraged patients to think about their beliefs, assumptions, and how they could rethink the troubling events in their lives. After years as a clinician, I taught research and statistics to undergraduate and graduate students. Many were fearful of statistics. Yet, many developed a sense of pride when it came to presenting their end of semester projects—they had learned how to discover knowledge rather than rely on mere opinion.

It may be an oversimplification of dealing with information by considering four roles (scientist, preacher, prosecutor, and politician), but I see his point and find myself in agreement. There is a nuance. In some settings, preaching and prosecuting may make sense. We live in a time when scientific knowledge presented by scientists is treated with cynicism rather than skepticism. My skepticism probably began with my father who was highly critical of opinions other than his own. Philosophy courses helped me develop more cogent arguments as I learned to identify weaknesses in my own opinions. I value skepticism but not cynicism. It’s good to analyze news reports, advertisements, educational theories, politician’s promises, history books, and medical advice. However, rejection of expert views in favor of opinions by those lacking expertise can lead to disasters in relationships, health, and governance.

The Epilogue could use some rethinking. Perhaps a few questions could send us on our way.

Adam Grant  is an organizational psychologist at Wharton. He earned his PhD from the University of Michigan.

GeoffreyW. Sutton is a retired psychologist and professor of psychology who continues to write about psychology. He earned his PhD from the University of Missouri.

and see my books on   AMAZON

Also, consider connecting with me on

THINKING, FAST AND SLOW-- A book review by Sutton

Kahneman’s analysis of thinking in Thinking, Fast and Slow, is close to a metatheory of human nature. In highly readable prose he explains how numerous psychological experiments document the interplay of two ways human brains process and act upon the myriad of stimuli encountered in daily life. Many reviews have extolled the brilliance of the book and its Nobel-prize winning author. My skeptical bias against excessive public endorsements was on high alert until I began to read. My copy has so many notes that it was hard to condense them for this review. I must confess, this was one of the best psychology books I have ever read.
Daniel Kahneman is Eugene Higgins Professor of Psychology Emeritus at Princeton University and Professor of Psychology and Public Affairs Emeritus at Princeton’s Woodrow Wilson School of Public and International Affairs. His work with Amos Tversky on decision-making earned him the 2002 Nobel Prize in Economic Sciences. If Amos had not died in 1996, he would have shared the prize. I have included two primary references (Kahneman & Tversky, 1984; Tversky & Kahneman, 1974) cited by the Nobel committee as examples of research articles you may wish to obtain.

Return to the title for a moment. The four words aptly describe the way we think and the sequence matters. Fast thinking is the norm. We quickly orient to the sound of a loud bang. If it’s July 4th in the USA, we easily attribute the BOOM to a partying neighbor rather than some mischief-maker. On a drive, we speedily process a garish image and a few inviting words writ large on a billboard. Almost without thinking, we detect a hurt facial response in a partner and quickly search available memory for an answer to the internal prompt, “What did I say?”

The second concept in the title is slow thinking. Slow thinking is that arduous process most of humanity avoids most of each day. It is the thinking that requires cognitive effort to focus carefully on a set of stimuli whilst ignoring other internal and external distractions so we can search memory and employ other resources to solve a problem. Sometimes the problems are not incredibly difficulty but the answers do not quickly arise in our consciousness like recalling our telephone number or slowing down and scanning more carefully when guiding our car into a narrow parking slot. The components of the thinking process appear to be organized into these two major systems, simply labeled System I and System II.

System I is automatic and works well enough for most daily activities. People cannot be vigilant all day, Kahneman points out. System II seems to engage as needed to address more complex situations. The effort required by System II does not come easily and seems to slow down not just thought, but the entire person as we might interrupt a walk to formulate an answer to an unusual question.
This story of thinking unfolds in 38 chapters organising diverse dimensions of cognition into five parts:
Two Systems,
Heuristics and Biases,
Overconfidence,
Choices, and
Two Selves.

Most of us seem to get along pretty well most of the time. But there are those moments when mistakes are costly. Truth is, many decisions are adequate but hardly based on refined decision-making models that employ logical analyses or even well-defined probability models. Heuristics and biases appear to account for the link between thinking and human behavior. Our propensity to respond based on available cues in our environment or memory, to assess situations based on plausible causes, and erroneously predict behavior can lead to significant difficulties for individuals, groups, or even nations. Part II offers a broad review of these cognitive errors.

Overconfidence is the essence of Part III. People tend toward excessive optimism and overconfidence. We experience illusions of understanding and validity. We are prone to excessive and often misplaced trust in experts. In Part IV, Kahneman reviews choice theory, which he explains using everyday examples. We leave this part of the narrative better equipped to detect factors apt to lead us astray. In part V, Kahneman offers a helpful review and leaves us with thoughts about life.

It is easy to see how Kahneman’s work would be of interest to academicians and researchers. But the implications for psychotherapists are far reaching as well because they illustrate how hard it is to interrupt error-prone cognitive-behavioral patterns to apply some new cognitive frame or employ a new behavioral response to recurrent life situations. Rituals and responses often labeled as spiritual or religious appear to be System I responses except when interrupted by troubling experiences that place our scripts on pause an induce a search for resources. An awareness of biases and the role of heuristics and overconfidence is relevant to clinicians, clinical supervisors, consultants, and clients. There’s a time for System I and a time for System II.