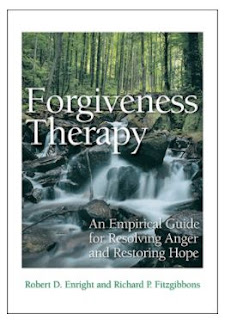 In the last few decades, forgiveness books and research studies have multiplied. Fortunately for clinicians, Enright and Fitzgibbons have provided a comprehensive work that is clinician focused with reviews of supportive research.

I was glad for the opportunity to review this update by one of the world’s leading forgiveness researchers. My interest in forgiveness, particularly but not exclusively Christian forgiveness, began during my work as a psychotherapist. More recently I have been involved in several research projects focused on, or inclusive, of forgiveness. My point is that the psychology of forgiveness is important to both clinicians and academics. And forgiveness is a process of value to people of many religions or none at all.

My review has been accepted for publication in an academic journal. In this post, I will provide an overview of the book and provide a link to the journal article.

Two key themes are evident in the authors’ approach to forgiveness. One is obvious in their definition of forgiveness (morality) and the second is present in many paragraphs but not so obvious (anger).

For the record, here is their definition of forgiveness (pp. 26-27).

People, on rationally determining that they have been unfairly treated, forgive when they willfully abandon resentment and related responses (to which they have a right) and endeavor to respond to the wrongdoer based on the moral principle of beneficence, which may include compassion, unconditional worth, generosity, and moral love (to which the wrongdoer, by nature of the hurtful act or acts, has no right).

Two primary dimensions of moral foundation theory proposed by Haidt and his colleagues are evident in the forgiveness definition. First, the injustice is founded on unfair treatment justifying the offended person’s negative thoughts and feelings. Second, the acts of the offender result in harm. Forgiveness thus becomes a moral response to give up a redress of violated rights in favor of moral love.

Now let me address the theme of anger.  Anger as the starting point for clinical work and a key feature of forgiveness therapy. They elaborate on anger as a complex state “at the center of forgiveness therapy (p. 17).” You will find the concept of anger coming up again and again in different chapters.

Enright and Fitzgibbons organized Forgiveness Therapy into three parts for a total of 16 chapters. They provide a description of their four-phase process model in the Introduction and offer details in chapter 4.

In phase one, clients uncover their hurts and begin to deal with their emotional pain. The decision phase (phase two) follows the developmental progression. At this point, clients learn about forgiveness and distinguish forgiveness from potential barriers such as beliefs that forgiveness entails reconciliation (chapters two and three). Clinicians will find a helpful 23-item checklist indicating what forgiveness is not on page 41. Clients learn to shift their attention to their offenders in the work phase (three). Various exercises help clients feel empathy and compassion for the offender. Finally, the deepening phase (four) helps clients find meaning in the process of forgiving and consider ways forgiveness may be applied to other offenses.

The phases are covered in considerable depth and include a total of 20 therapy tasks or units ranging from 3 to 8 per phase. The concept of units is similar to a list of tasks that clients accomplish within each phase. For example, in the uncovering phase clients develop an “awareness of cognitive rehearsal of the offense.” The authors note that not all people follow the same sequence to reach forgiveness.

There are six chapters in Part II (chapters 6-11). Each chapter illustrates how forgiveness therapy may play a role in the treatment of a specific mental disorder or group of mental disorders. The authors review the criteria of common DSM-5 (2013) conditions with a focus on the features of anger or irritability in the diagnostic criteria as well as in related research.

Examples of chapter contents include: Depressive, Bipolar, Anxiety, and Addictive disorders. Additional chapters address conditions of childhood and adolescence such as Oppositional Defiant Disorder and forgiveness for couples and families.

Chapter 13 reviews ways to assess forgiveness—including five measures developed by the authors and their colleagues. Chapters 14 and 15 offer philosophical considerations dealing with challenges to forgiveness and matters of morality and religious faith.

The final chapter is a summary and conclusion chapter. It includes an expanded idea of hope—a word found in the book’s title. The authors encourage readers to be a part of a hopeful future by leaving a legacy of forgiveness for the betterment of humanity.

I think this books is best suited to clinicians. I think the case examples and integration with diagnoses will make the book particularly useful to new clinicians who have not explored the many ways forgiveness interventions may help treat aspects of other concerns than "just a forgiveness issue."

I also think the book will be helpful by clergy and human service workers who frequently encounter people who feel hurt and distressed by problems that may have ocurred many years ago. Understanding how anger over past hurts can be a factor in many aspects of mental illness can open possibilities for progress.

Book Ad  Read about forgiveness for sexual behavior in Chapter 12

Forgiveness Interview with Rober Enright- it is about a different book but you will get Enright's perspective on forgiveness.