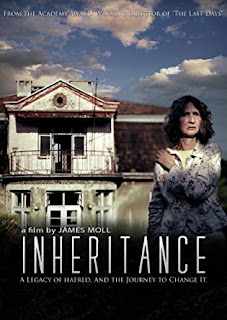 Inheritance
A Legacy of Hatred and the
Journey to Change It

This 2006 documentary tells the story of two women with very different “inheritances” from Amon Goeth, the Nazi commandant of the Plaszow Concentration Camp in Poland. Goeth was known for his brutal murders of thousands of Jews.

Monika Hertwig is the daughter of Amon Goeth and Ruth Kalder. She gradually learned bits and pieces about her father’s horrific treatment of the Jews. It would be a mistake to overlook the role of her mother who had an affair with Goeth and a troubled relationship with Monika. The Spielberg film, Schindler’s List (1993), appears at a pivotal moment in Monika’s efforts to come to grips with her family history and her own identity.

Monika learns of a Jew, Helen Jonas-Rosenweig, who was a kitchen slave in her father’s manor house. Helen survived the holocaust with assistance from Oskar Schindler, whom she describes as a different kind of Nazi. Helen is in the United States and responds to Monika’s request to meet. A powerful emotional meeting makes the documentary a memorable experience unlike other holocaust stories.

The focus of the film is on Monika. However, we also learn the now familiar story of so many lost lives during the holocaust. In addition to the death of family members, Goeth shot Helen’s boyfriend. She eventually married a survivor but tragically lost him to suicide.

I recommend this film for its portrayal of real people trying to live in the present and achieve some sort of reconciliation with their past. The impact of one man’s evil on just these two people after some 60 years is incredible without considering the thousands of other lives he destroyed.

I watched the film streamed from Amazon prime.