Ethics in the Age of the Spirit- A book review 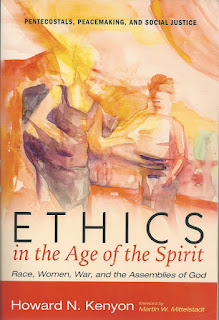 ETHICS IN THE AGE OF THE SPIRIT:

The topics of race, women, and war, in Kenyon’s subtitle, are certainly timely issues. In 2016, the son of a Black father and White mother neared the end of his two terms as the 44th U.S. president while a woman campaigned to replace him. Meanwhile, the U.S. was at war, as it has been for 222 years since 1776 (Charpentier, 2017). Drawing on archival data, Howard N. Kenyon examines Pentecostals’ ethical response to racism, sexism, and war in the context of their fundamentalist roots and the historic cultural changes that have occurred in the past one hundred years.

Howard N. Kenyon is a fourth-generation Pentecostal. He earned his Ph.D. in Ethics from Baylor University in 1988. Ethics in the Age of the Spirit is an updated version of his dissertation. He is currently Vice President of Ecumenical Ministries of Oregon. And he continues to express his concerns in presentations, essays, and blogs.

Kenyon’s inquiry begins with five context-setting chapters explaining the holiness roots and early revivals which led to the 1914 formation of the Pentecostal fellowship known as the Assemblies of God (AG). Although the roots of American Pentecostalism may be traced to the 1800s, most historians associate the beginning of the new religious movement with the exuberant prayer meetings of the early 1900s marked by reports of divine healing and glossolalia. In this review, I focus on Kenyon’s three ethical topics, consider how his data fit with moral foundations theory, and suggest psychosocial factors that behavioral science readers might find relevant.

RACE
Kenyon refers to the AG race relations policy as a reactionary ethic (chapters 6-11). Rather than offering ethical leadership, the AG was guided by the values of their dominant white evangelical kin. At the time of the spiritual revival in the early 1900s, Blacks and Whites worshipped together, but by the time of the organization of the AG in 1914, they were mostly white (see photo), and a contemporary denomination was mostly black (COGIC: Church of God in Christ). An example of early black-white thinking can be seen in a pithy 1933 photo caption: “Black faces–white hearts (p. 71)” One example of a reactionary ethic is the marked shift in credentialing of a black pastor, Robert Harrison (1928-2012). Initially, he was denied credentials upon graduating from an AG bible school; however, he received them in 1962 following his rise to international prominence within the Billy Graham Evangelistic Association. It is noteworthy that the AG and COGIC met in powerful reconciliation meetings in the 1990s known as the Memphis Miracle (Underwood  AG,  COGIC )

WOMEN
Like the story of African Americans, women were also active participants in the seminal Pentecostal revival meetings (chapters 12-16). Several women were prominent evangelists within Pentecostal enclaves, and a few (e.g., Florence Crawford, Aimee Semple McPherson) achieved wider recognition. Unlike blacks, and unlike women in many other denominations, Pentecostal women were credentialed and served as evangelists and missionaries. However, numerous discussions led to various rules limiting acceptable pastoral duties. In discussing an early debate over women serving as elders, Kenyon noted, “the issue of distinction was clearly one of authority (153).” Kenyon refers to the ethical stance toward women as a dogmatic ethic. By this, he means that scripture, or more properly an interpretation of scripture, held sway. Today, women are visible leaders in the AG. See the AG position paper on the role of women in ministry for their current position (2010).

WAR
Finally, Kenyon examines the significant reversal of Pentecostals’ stance on participation in war (chapters 17-21). In the early years, the position of the American AG was decidedly pacifist. Some cited Jesus’ ethic of loving one’s neighbors and enemies. And some referred to the sixth commandment forbidding killing. Others argued that the proper focus of ministry is on reaching the lost with the gospel—there was a sense of urgency because they viewed the outpouring of God’s Spirit on believers and the horrific World War I as signs of Jesus imminent return. The pacifist position changed when America entered the war. The Espionage and Sedition Act of 1917 significantly dampened public pronouncements against war and encouraged the new movement to assure the government that they were loyal citizens and not a group of rebels. World War II delivered the knockout blow (my opinion) to any pacifist inclinations as the AG demonstrated pride in their young servicemen and gave considerable effort to support their spiritual needs. See the AG position paper on peacemaking (2015).


Reading Ethics as a psychologist, I thought it was much like a case study illustrating the three binding dimensions (purity, authority, loyalty) of moral foundations theory explained by Jonathan Haidt in The Righteous Mind (2012), which is supported by recent research among Pentecostals and evangelicals (Sutton, Kelly, & Huver, 2019). Segregation, the aforementioned purity quote, prohibitions against interracial marriages, and antimiscegenation laws (overturned by SCOTUS in 1967) exemplify both racial (e.g., see Nacoste, 2018) and sexual purity concerns (e.g., see Sutton, 2016).

The language of the struggle for women’s right to be fully engaged in pastoral work was aptly presented as a struggle over authority and reveals the tension between women’s recognized gifts of preaching versus the authority issues attributed to select Pauline texts. Finally, Kenyon’s explanation of the loyalty issue faced by AG pacifists, reveals the tension experienced by those who felt torn by loyalty to God versus loyalty to the government.

Readers familiar with behavioral science may also want to consider the power of psychosocial factors influencing the ethical considerations of Christian organizations. For example, it seems quite ironic that despite early ethical wrangling over supporting war, the two wars served as catalysts for the rights of African Americans and women based on their substantial contributions to the war effort at home and on the battlefield. Women got the right to vote and a slow but traceable path approaching equality.

Under threat of protest organized by A. Philip Randolph, Roosevelt banned racial discrimination related to war production in 1941 (Gates, n.d.). Also, at about the time Rev. Harrison was dealing with discrimination, the U.S. Supreme court ruled against school segregation (1954) and in 1957 president Eisenhower ordered the National Guard to protect nine black students entering a white high school in Arkansas (history.com)—four decades after the AG was formed in the same state. Finally, reminiscent of their study of Appalachian Pentecostals (Hood, Hill, & Williamson, 2005), the theory of intratextual fundamentalism may also be applied to understand the dynamic at work when AG leaders employed biblical texts to support authority and loyalty concerns related to women and war issues.

Ethics in the Age of the Spirit deserves a place in the libraries of Christian colleges and seminaries. It will surely be a valuable resource in courses on Christian ethics, especially for those in Pentecostal and Evangelical institutions. I think it also highlights the value of archival analysis to examine shifts in patterns of moral foundations.

I became friends with Howard Kenyon via social media connections and for a brief time, his father was the pastor of the church I attended in my early teen years. I learned about this book from a mutual friend, Marty Mittelstadt, who wrote the foreword. It is possible that I have been favorably biased in writing this review.

I have written an academic review, which has been accepted and I hope will be published in 2020 but that process is slower than posting on a blog.

I cannot guarantee that the links in this blog will always work. I hope you have enough information to search if the information is still available.


A related book: A House Divided on AMAZON

Sutton, G. W. (in press). [Review of the book Ethics in the age of the spirit: Race, women, war, and the Assemblies of God by H. N. Kenyon]. Journal of Psychology and Christianity. Accepted 20 December 2019.  ResearchGate         Academia


Also relevant: Christian Morality on AMAZON and other sellers worldwide.