PAGAN CHRISTIANITY:
EXPLORING THE ROOTS
OF OUR CHURCH PRACTICES 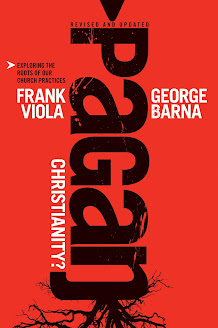 What would worship look like if you did not enter a church building, follow a typical liturgy,
listen to a sermon from a seminary-trained pastor, or listen to special music? Viola and Barna
dedicated Pagan Christianity “to exposing the traditions that have been tacked onto God’s will for His Church (p. xx).” Further, “We are also making an outrageous proposal: that the church in its contemporary, institutional form has neither a biblical nor a historical right to function as it does (p. xx).”
Both authors are nationally known. Frank Viola, an active church planter, has written several books that challenge the traditional church. George Barna is the chair of Good News Holdings, a multimedia firm in Los Angeles and the founder and directing leader of a research firm, The Barna Group. Despite the bold title, the authors do not advocate the overthrow of existing church communities. They are not out to inspire rebellion. Rather, they want us to be aware of the humanly devised traditions that have come to mean church for so many contemporary believers. Once alerted to these issues, believers are encouraged to either leave quietly and find a New Testament church or live peacefully in their present faith community.
After introductions, the authors reveal pagan traditions behind several aspects of modern church life in chapters two through ten. The next time you go to church, you might wonder when people began going to church. Given the extant information, it seems church buildings did not appear until about the year 300 CE. For more than two centuries, Christians worshiped in small groups. In time, the church qua organized religion began the construction of sacred buildings with special physical (pulpit, pews, balconies) and cultural trappings (special priests, choirs, incense).
Aside from the unchristian origins of these developments, the authors punctuate their criticism by noting the high cost of such religious overhead. They estimated the value of church real estate as over $230 billion. Mortgages and maintenance requires a substantial portion of the $50 to $60 billion churches garner from tithes and offerings.