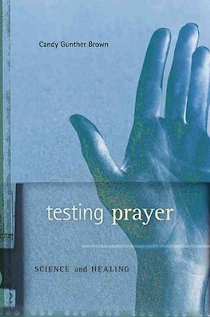 I'm posting this review in the early stages of the 2020 Coronavirus. China has quarantined large portions of their population. Italy has been shut down. Europe is preparing for trouble. The US health agencies have issued warnings. Europeans are banned from entering the USA.  On social media, some Christians are minimizing the problem to temper reports they see as exaggeration. Others are talking about God's protection and still others remind people of God's healing power. Meanwhile, people are engaged in panic buying of cleaning agents and toilet paper. Panic is in the air. "It's a pandemic," we are told.

Do you believe in God’s power to heal?

I have lived with and studied Pentecostals for most of my life so, I am interested in the scientific study of their beliefs, practices, and experiences. Pentecostals are not alone in believing in divine healing (healing attributed to God), but it is a central tenet of their faith.

In Testing Prayer, Candy Gunther Brown reports evidence that most Americans view God as a healer and believe praying to God can result in a cure. Support for the role of prayer in healing also comes from most American health maintenance organization executives and medical doctors. It’s no secret that most people pray and many of their prayers are petitions for healing. Brown leads readers through a process of discovery to explore how scientific procedures might establish a viable link between prayer and healing. But first, anticipating criticism from believers and scientists, she presents a plan to show how the same phenomena of healing prayer may be viewed differently by believers and scientists without denigrating either perspective.

Brown gives us the background for her project. The Toronto Blessing began in 1994 when Randy Clark of St. Louis, Missouri, USA, traveled to The Canadian city of Toronto, Ontario at the request of John Arnott, pastor of the Toronto Airport Vineyard Church. Many testified to God’s healing power during the services. As word spread, many came seeking healing and spiritual renewal. Having set the proximal impetus for healing within the groups she would study in the USA, Brazil, and Mozambique, Brown provides a broader context for Pentecostal beliefs in healing. She begins with the New Testament and reviews the three waves of recent events since the American Azusa Street Pentecostal revival.

In chapter two, Brown provides a basis for including biomedical tests to document testimonies of healing. The chapter presents a defensive posture couched in the history of various attempts to provide some documentation that healing did occur following prayer. Her review of more recent studies documents the variations in the way people pray and the particular scientific difficulty in linking intercessory prayer at considerable distance to a person who was healed as a result. Gunther is aware of other interpretations of healing. In addition to the well-known Hawthorne effect, she includes such established effects as empathy, hold-back, demand, and practice. Considering the barriers, Brown suggests a study of proximal rather than distal intercessory prayer may offer an opportunity for improved research validity.

Several accounts of healing have provided medical records to demonstrate significant changes following prayer. In chapter three, she cites results from Oral Roberts and Kathryn Kuhlman as well as more recent reports showing improved medical status. Not surprisingly the quality of the records vary and even when improvements were noted, they were not routinely linked to prayer as the sole or primary cause of the successful outcome.

Chapter four contains an analysis of how people who are ill perceive healing prayer. The chapter is the first of three chapters focused on the author’s research. There are detailed tables describing the study participants at different geographic locations.

The top five prayer needs and reported outcomes were as follows (Table 4.5, p. 178). It is a lengthy table and worth consulting for details.

As a psychologist, I was also interested in mental health conditions. Five of 19 reported healing for depression and 2 of 11 were healed of an addiction. A general category called "Mental/emotional/inner healing" had a higher rate -- 9 of 11 reported healing.

I suspect many readers will find the complete list quite interesting. The author is aware of the limitations of survey methods and appropriately cautions the reader about interpreting findings based on self-report.

In chapter five, Brown offers specific medical evidence of healing for vision and hearing impairments. Using equipment suitable for field work, her team attempted to collect audiometric and vision chart data before and after prayer for healing.

In the study, the prayer intervention is proximal intercessory prayer (PIP) performed by Pentecostals who place their hands on the person in need and pray to God for healing for a common time duration of 1 to 15 minutes. Healing was defined as improvement.

Measurable improvement did not require a change from no functioning to complete functioning. Although the sample was small, she was able to document statistically significant improvements in measures of hearing and vision. Again, Brown is cautious in her interpretation noting the difficulties in collecting accurate data in a field study.

Finally, in chapter six, Brown considers the problem of documenting the duration of healing. She reports case studies and offers them as evidence not so much of divine healing but as evidence that perceptions of divine healing experiences have the potential to exert lasting effects on the individual healed as well as family and friends who witnessed the recovery.

Testing Prayer ends with a summary conclusion, an idea regarding how a perception of interaction between divine and human love may be linked to benevolence, and suggestions for future research. As readers, we find that there is some evidence linking prayer to healing. We are also reminded that the application of scientific methods to the study of prayer as a causal agent in successful prayer-outcomes is limited in scope. Clearly, as the author notes, believers and scientists offer different attributions to explain the same phenomena.

Some Thoughts on Brown's Work

I appreciated Gunther's attempt to provide empirical evidence for healing. Based on her findings, it does not appear to be a fruitful area for additional research. The evidence for consistent and miraculous complete recoveries from medically documented impairments in response to prayer is not evident by surveys or the prayer and testing methods in the report. Some people are healed and some are not.

I should also note that counting healing as an improvement hardly qualifies as healing in the usual biblical sense. Certainly, she has not been able to document the sort of stories one reads in the Gospels as close to a certainty for those who pray. Believers will continue to pray and when they are healed, they will tell their stories of God's work. Believers who have not been healed rarely tell their stories, but I suspect they continue to attend church and pray. Some will seek to understand how to make sense of the lack of healing. And perhaps some of those who were not healed will continue to hope and pray as they try various medical and nonmedical methods to gain relief.

I feel empathy for those experiencing pain and suffering. I especially feel for those who have prayed for healing with no result because that experience can lead to an additional burden of a spiritual struggle.

I am appalled by faith healers and any clergy who hold out hope of healing without evidence that those who suffer can count on God to heal them. Evidence is everywhere of sincere believers who earnestly request healing for themselves and people they care about. So many struggle with ill health until they die. Many of my friends have a from of dementia or a family member with dementia. How nice it would be if all one had to do is pray for healing and see God work a miracle.

I am pleased to note that many clergy in the western cultures that I know about do not encourage their parishioners to give up medicine or medical care while they are praying for healing. This combination of interventions necessarily interferes with any scientific analyses of effects when someone is healed, but this sort of integration of faith and medicine appears the only reasonable way to proceed.
I included some of Brown's research in Counseling and Psychotherapy with Pentecostal and Charismatic Christians. Some findings relevant to clinicians and consultants include aspects of charismatic culture, understanding prayer and healing, and some references to mental health conditions.

Love and the Assemblies of God