Unbelievable a book by John Shelby Spong - A Review 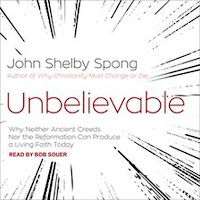 Why Neither Ancient Creeds

Can Produce a Living Faith Today

Spong provides examples of Unbelievable doctrines of the church and calls for a second reformation. He presents 12 challenging theses as foundational to building a new understanding of the Bible by relying on a more rational appreciation of the metaphorical and meaningful truths of the scriptures rather than the implausible literal interpretations that obscure a meaningful spiritual life.

His presentation appears focused on educated adults who have not lost their interest in Christian spirituality but are not satisfied with current presentations of Christianity found in Protestant or Catholic pulpits. He is particularly concerned with the distortion of faith found in those who present simplistic and literal, or near literal, views of creation, biblical violence, and miracles as well as church traditions of teachings like a trinitarian view of God.

His reformation ideas reflect a summary of what Christian scholars have learned about science and the Bible in the past century as well as experience in trying to communicate a coherent message of Christianity to educated audiences.

Following introductory comments, Spong invites readers to reconsider the character of God with a focus on God as Being. Next, he addresses the difficult teaching about the incarnation and the nature of Jesus as a person and as Christ. He challenges beliefs in original sin, the virgin birth, and many miraculous stories from ancient Israel to the works of Jesus and his followers.

Other teachings re-examined include atonement theology, beliefs about Easter, and the ascension of Christ. Matters of practice include two theses on Ethics and the relevance of the Ten Commandments as well as a new understanding of prayer. He closes with discussions on life after death and universalism.

A sample of quotes from Unbelievable may help you get a sense of Spong's challenges to traditional Christian doctrines.

About God: "God is. Because God is, I live, I love, I am. Does that mean that God exists? I do not know what that question means. I experience God; I cannot explain God. I trust my experience."

Jesus and the resurrection: "So the first step that those of us who wish to explore the meaning of resurrection must take is to recognize that the founding moment of the Christian story is not about either an empty tomb or the resuscitation of a deceased body. Its original proclamation asserted that in some manner God had raised Jesus into being part of who God is. Jesus was raised by God into God."

The Virgin Birth: “There is no possibility that the virgin birth was ever meant to be literally believed."

On miracles: “We do not have to twist our brains into first-century pretzels in an effort to believe the unbelievable. We can read the miracle stories as the symbols they originally were…”

About the “Fall” of humanity: “If Christianity is to have a future, the paradigm must shift from being saved from our sins to being called into a new wholeness from our sense of incompleteness.”

The resurrection: “Whatever it was that constituted the Easter experience, the obvious fact is that there was enormous power in that moment that cries out for explanation. That power changed lives…”

I'm a psychologist and not a theologian so I do not have the background in theology and biblical studies as seminarians would have. I have seen a lot of young people from conservative backgrounds upset with the way fundamentalists and evangelicals write and speak about their faith in social media posts. Some have come out as having left Christianity and some have moved on to other churches. Whatever form a reformation takes, Christian teachings are surely due for an update in language understood by contemporary young people.

As a clinician, I am reluctant to attack a person's understanding of faith when that understanding provides comfort and support that promotes their wellbeing. However, Spong offers some helpful perspectives for those disenchanted with traditional dogma. For example, those who notice their traditional prayers have not been answered may find his discussion of divine presence encouraging.

I suspect even liberal thinkers will be reluctant to embrace some of his speculations, which are unbelievable in a different way. For example, although he makes a reasonable case for distorted views about God, Spong's philosophical musing about God qua being doesn't offer a persuasive alternative.

Reference (I listened to the unabridged audio version and looked at the eBook, which is where I obtained the quotes.)

Spong, J. S. (2018). Unbelievable: Why Neither Ancient Creeds Nor the Reformation Can Produce a Living Faith Today. New York: HarperCollins.

You can find a few lectures by Spong on YouTube. Here is one example.

I write books and articles- please checkout the following links and sign up for updates.