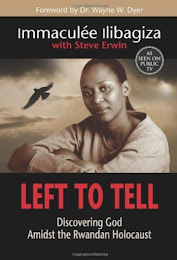 “If they catch me, they will kill me,” (130) thought Immaculée as she struggled physically, psychologically, and spiritually to survive the 1994 Rwandan genocide.

Part one sets the stage by revealing Immaculée’s emerging awareness of the powerful prejudices between the ruling Hutus and minority Tutsis. At school, she became aware of the racial differences during ethnic roll call, in which students identified themselves by name and status as Hutu or Tutsi. As a Tutsi, and a woman, her opportunities for advancement were limited, yet her intellectual talents were eventually recognized, and she was admitted to a university.

In part two, Immaculée takes us blow by blow through the genocide as the carnage unfolds in her small village. Neighbours turn against neighbours, and no Tutsi is safe from the killing sprees that sweep the villages and towns of this central African nation. As the deaths of family and friends mount, she runs to a Hutu pastor for safety. Her inner struggle for meaning, faith, and hope permeates the pages describing  her precarious survival in a 3 by 4 foot bathroom.

Immaculée emerges from hiding when the French establish nearby camps. Soon, victorious Tutsis  liberate the prisoners, and Immaculée is on her path to freedom (part three). But physical survival is not enough. We see her rise above the ashes to experience a new dimension of emotional and spiritual freedom.

During her incredible journey to forgive and reconcile with those who murdered her family and friends, we learn that she experiences a call on her life, “I could see that whatever path God put me on, helping others to forgive would be a big part of my life’s work” (159).

“I could see that whatever path God put me on,

Clearly, Left to Tell is not an academic text, nor is it a clinician’s handbook. Why should professionals care about this biography? I was drawn to the story because of her powerful message of forgiveness and reconciliation as well as her experiential answer to the age-old question of suffering.

This book should stimulate meaningful discussion in groups and on college campuses. Researchers and clinicians interested in forgiveness should read this book if for no other reason than to challenge the limits of such concepts often measured in university psychology labs or the comfortable counselling offices of American suburbia. We cannot limn the contours of our constructs unless we examine responses to transgressions that image the face of evil.

In addition to the example of forgiveness and reconciliation, Left to Tell is a story of the importance and power of spirituality to survival. She was protected by a pastor and she nourished her faith while hiding from those who sought to kill her. Her faith is that of a charismatic Catholic.

This review was previously published in 2010. It is slightly modified and republished here by permission of the author.

Link to Forgiveness and Reconciliation for a list of related books

Link to   Left to Tell book on AMAZON

Link to a DVD of Left to Tell on AMAZON

Following is a video of Ilibagiza speaking at Villanova.

"Today, Immaculée is regarded as one of world's leading speakers on faith, hope and forgiveness. She has shared this universal message with world leaders, school children, multinational corporations, churches, and at events and conferences around the world, including a recent presentation to over 200,000 people in Sao Paulo, Brazil." (immaculee.com)
About the reviewer
Geoffrey W. Sutton is a research psychologist and author with over 100 articles, books, and book chapters. His website is www.suttong.com.

If you like what I write, please subscribe to this blog. Following are other ways to connect.

I welcome comments that are not advertisements or derogatory.

Email ThisBlogThis!Share to TwitterShare to FacebookShare to Pinterest
Labels: Forgiveness and reconciliation, psychology and religion