The Happiness Hypothesis - A Book Review

Why the Meaningful Life is Closer Than You Think

The Happiness Hypothesis is one of the best positive psychology books available in 2006 because Haidt integrates lessons from ancient sages with scientific evidence about a meaningful life.

Haidt begins by explaining two important systems in the mind as seen by ancient thinkers like the apostle Paul who considered the common problem of the battle between desires of the flesh and desires of the spirit. Haidt uses the metaphor of a rider atop an elephant to illustrate the difficulty in controlling the habitual ways of a large elephant charging through life with little cognitive awareness.

The second powerful idea is the time-honored truth that a happy or meaningful life often hangs upon the view people take toward life events. Our experience with people shows matches the evidence that people express different attitudes toward the same event such as a pessimistic or optimistic view.

The third idea is the importance principle of reciprocity in social relationships. It is a sort of social glue but we must beware of the ways people can manipulate us toward unhealthy choices.

Our inability to detect our own faults is the fourth point. It’s amazing how good we are in seeing other’s faults while being blind to our own, which can lead to impaired relationships.

Haidt parts with some ancient wisdom to explain how happiness is not just about an inner state of mind, but a relationship between our inner state and real-world action.

Love is his sixth idea. He examines different dimensions of love and finds philosophers give bad advice.

People respond to trauma in different ways. Haidt takes on Nietzsche’s quote, “What doesn’t kill me makes me stronger.” Some people are resilient and grow as a result of hardship, but some end up with PTSD. There is a difference.

Chapter eight deals with the corruption of the rich ideas behind the classic virtues and considers morality in a diverse society.

His ninth idea deals with spirituality. Haidt explains the importance of the psychology of disgust to appreciating the human tendency to rise above life’s unpleasantness and appreciate the awe of the sacred.

Finally, Haidt considers the interactive relationship between one person and others in formulating the happiness hypothesis. There are many ways people may have a happy and meaningful life.

I recommend the Happiness Hypothesis to anyone who wants to appreciate the way in which psychological scientists have examined support for ancient wisdom drawn from philosophers and religious leaders for thousands of years. His book, The Righteous Mind is a follow-up to the Happiness Hypothesis with a focus on understanding the moral divide between conservatives and liberals found in many societies.

If you are interested in more in-depth, but highly readable, findings on our divided thinking, read Kahneman’s book, Thinking, Fast and Slow.

Haidt, J. The Happiness Hypothesis: Finding Modern Truth in Ancient Wisdom: Why the Meaningful Life is Closer Than You Think.

Living Well: 10 Big Ideas of faith and a meaningful life. 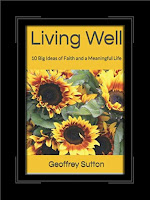