Line of Duty, a police drama, is one of the most popular BBC TV series of all time.

Line of Duty engages viewers at different levels. The show is an action-adventure police mystery drama that keeps viewers wondering what will happen in the next episode. It's also an insightful look into human nature and the relationships that shape behavior.

The series features two officers who work as partners in an anti-corruption unit known as AC-12. DS Steve Arnott (Martin Compston) is an AFO (Authorised Firearms Officer). He joins the anti-corruption unit after refusing to join his team in covering up the fatal shooting of an innocent man. His partner is DC Kate Fleming (Vicky McClure) who is also an AFO.

The other main character is AC-12 Superintendent Ted Hastings (Adrian Dunbar) who doggedly pursues bent coppers. His Catholic-Irish roots are revealed in sayings, accent, and his history of policing during the troubles.

In the background of various series investigations, is Hasting's quest to identify a network of bent coppers. As the series progresses, more and more connections are revealed.

In addition to well developed characters struggling with various relationship difficulties, they deal with personal struggles such as financial stress, physical pain, and painful memories. Jed Mercurio created Line of Duty. He and other producers show insight into human nature, which can inspire hope and shine a light not just on corruption per se but the fear and anger that often lie beneath what people say to justify their behavior.

My wife and I watched Line of Duty on BritBox in the US except for season 5, which was broadcast on Acorn.  Britbox is a product of BBC and itv.  Acorn streams many British and other series.  Some seasons are also available on Hulu. These services available in apps may be available for free trials. Note that availability can vary so what is stated here is only what I found at the time of this post.  Line of Duty was rated 8.7 of 10 at imdb.com  and 96% on Rotten Tomatoes at the time of this post.

If you like British films and shows, you may appreciate the book, Mind the Gap...Between British and American Language and Culture available on AMAZON  and  GOOGLE 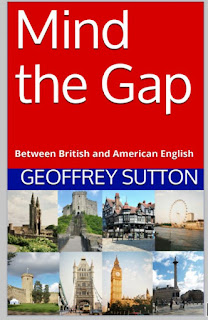 Geoffrey W. Sutton is a psychologist and author.