The Last Week by Borg and Crossan 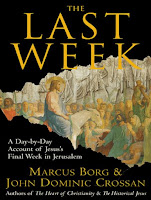 The Last Week is, as the subtitle says, is a daily study of the events taking place during Jesus’ last week on earth. The authors structure their work by focusing on Mark’s gospel written about four decades after Jesus’ crucifixion. In the preface we learn the value of the week’s sequence spelled out by Mark, which allows the authors to trace the events leading up to the cross and the Easter celebration. Not surprisingly then, readers find eight chapters taking us from Palm Sunday to Easter Sunday.

The clarity of writing and scholarly presentation of information missing from so many sermons make this an ideal read for Lent so I highly recommend it for Christians who are unclear on the significance of the week in the first century context of the Roman Empire as well as for a meaningful message that conveys the passion of the Son of Man who dared challenge the Holy Roman Empire.

We see Jesus entering Jerusalem and confronting the religious authorities who held court at the temple and would do so as long as they kowtowed to Rome. The tight relationship of religious and political power controlled the lives of those to whom Jesus spoke about spiritual freedom. Religious-political collaboration is an old story that has not yet ended.

The temple becomes the focus of Jesus challenge to the “bandits” who robbed its sacredness as a place of prayer for all. Readers who know history will be aware that the temple was destroyed by Rome in 70--about the date this gospel was written.

The day opens with the end of the cursed fig tree that has died. Jesus adds a lesson of faith. And Mark frames the destruction of the temple as a parallel to the fig tree story.

Mark tells of one conflict after another between Jesus and the Jewish leaders who were keen to entrap him and challenge his authority in front of his followers. The authors are impressed by Jesus skill in throwing back the challenges with counter-questions and parables like the man who planted the vineyard, a question about paying taxes to Caesar, and the nature of marital relationships in the afterlife. Each time, we learn about the cultural significance of these issues and our appreciation of Jesus' management of the conflicts between the kingdom of God and the kingdom of the religious-political authorities.

On this day, the authors highlight two contrasts between the story of the traitor and the unnamed woman who anoints Jesus. In contrast to the disciples, she anticipates Jesus' death. The authors see her as the first Christian—the first believer. In Mark, even Jesus' insiders have problems of faith compared to others like this woman.

Holy Thursday is the day Jesus and his followers share their last meal together. I quote the authors.

The Last Supper is about bread for the world, God’s justice against human injustice, a New Passover from bondage to liberation, and participation in the path that leads through death to new life.

After the arrest and Peter’s denial, we learn of Jesus trial and his confession that he is the Son of Man. To explain this title, the authors take us back to the story of Daniel.

Mark’s story breaks the day into three-hour intervals. Following his appearance before Pilate, Jesus is crucified. A few comments reveal Mark's use of symbolism. There’s darkness upon the land linked to pain and judgment. The temple curtain is torn, which hits at the heart of the control by imperial-religious authorities and leaves the people free to connect with God as Jesus did. And, in contrast with Jesus’ disciples, a Roman centurion declares Jesus as God’s Son—a title given to Caesar.

It’s strange to see a chapter about Saturday because Mark skips from Friday to Sunday. Here the authors delve into that story of Jesus’ proclamation of liberation to those saints who died before—it’s the story referred to as Jesus’ descent into hell. The authors quote various sources to illustrate how this old Jewish-Christian story was understood and how it fits with the arrival of the kingdom of God.

Easter Sunday is here. The authors ask questions to challenge readers to set aside childhood stories of Easter to consider its meaning. They observe variations in the reports of the different gospel authors. Rather than portray a mashup of one story from multiple sources, they present the differences as variations on what people recall from life events. The focus is on the meaning of Easter and not an exercise in what might have happened if only we had a video record. Thus, the authors suggest viewing Easter as a parable and not concerning ourselves with the historical evidence as we have come to think about historic facts in the modern era.

The authors view the metaparable of Good Friday and Easter as dealing with the human problem of “What ails us?” We know something is wrong. We need a transformation. Borg and Crossan present a twofold answer or our problem: 1. Egoism, or our self-centeredness and 2. injustice that requires a political transformation.