The Meaning of Jesus: Two Visions 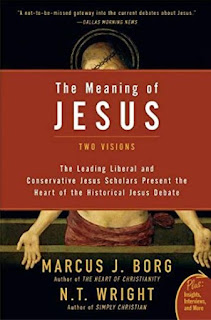 The Meaning of Jesus:

In The Meaning of Jesus, two religious scholars take turns presenting different perspectives on the same salient events or topics about Jesus and his ministry. I’ll offer a brief summary of the eight parts followed by some comments.

1. How do we know about Jesus?

Borg, a Jesus scholar, explains the source material that is available about the historical Jesus then takes readers through an easy-to-read introduction to methodology—how he uses the sources. Wright offers the traditional or conservative, albeit scholarly, perspective on understanding Jesus through the lenses of faith and history.

2. What did Jesus do and teach?

Wright provides the sociohistorical context for Jesus mission. He stresses the importance of the fact that Jesus was a Palestinian Jew. He notes a few points about Jewish monotheism and Jewish eschatology—"history is going somewhere.”

In Borg’s chapter, he makes a familiar point about the differences between Jesus before and after Easter. Before Easter, Jesus was a Jewish Mystic characterized by five elements: Jesus as a Spirit Person, healer, wisdom teacher, social prophet, and movement initiator.

3. The death of Jesus

Borg begins with the question: “Why was Jesus killed?” Borg considers much of the meaning surrounding Jesus’ death as found in the New Testament to be “prophecy historicized rather than as prediction fulfilled.”

Wright calls his chapter “The Crux of Faith” and emphasizes the traditional importance of Jesus’ death. Jesus led the way to death as martyrs have always done. He notes the context of Israel who had sinned and was punished in exile. In God’s timetable it was time to deal with Israel's history— when Jesus came, “the time of forgiveness had arrived.”

4. God raised Jesus from the dead

Wright takes the lead in this inquiry. He sets the resurrection in the context of a range of Jewish beliefs about life after death in the first century. Some like the Sadducees denied life after death. Others believed in life after death, but not in bodily form. The Pharisees represent the other pole—they believed in a bodily resurrection. He acknowledges the difficulty in harmonizing the Easter morning stories in the gospels, but this does not cause him to doubt what happened. In Wright’s view the variations represent a lack of collusion.

Borg reminds us that Easter is central to Christianity—“a foundational affirmation,” he calls it. Borg affirms “Jesus lives, and Jesus is Lord.” His disagreement with Wright is in the support for the two affirmations. He uses a familiar challenge—what might we see if we had a video camera. Borg’s view is that the physical resurrection is not important compared to the truth of Easter. His view of the gospel stories is that they should be viewed as a developing tradition in the early church and as “powerfully true metaphorical narratives.” As a part of his argument, he refers to Paul who reported his encounter with Jesus as a vision on the Damascus Road. Borg notes that the others with Paul did not share the experience. And Borg adds his view that visions and apparitions can be truthful experiences and are not hallucinations.

The divinity of Jesus is an old belief within Christianity. It is a fundamental doctrine found in the Nicene Creed and a “test” of whether or not someone is a Christian. Borg tries to explain his nuanced view that during his life, the evidence does not indicate Jesus thought of himself as God (the pre-Easter Jesus). Following Easter (the post-Easter Jesus), Jesus is one with God. He reminds readers of a variety of images in the gospels such as Jesus is the bread of life, the true vine, the door, Son of God and Word of God. According to Borg, these sayings were statements of the early Christian community and should be seen as metaphors representing a different kind of true statement than a statement of fact. He refers to the Old Testament to illustrate that Son of God refers to Israel and the King of Israel.

For Jews like Jesus, there is one God, Wright reminds us as he takes us through a possible development among the early Jewish difficulties in understanding Jesus after Easter. For early Christians, Jesus was the Jewish messiah but he was also with God.

6. The birth of Jesus

Christmas is more important than Easter in our culture, Wright observes. He sees the birth stories as having little significance and notes they function as a test of belief and sexuality. He admits to the problem of belief in the virgin conception and variances in the birth stories by Matthew and Luke.

Borg does not see the birth stories as historically factual but as true as literary works using ancient imagery to express truths about Jesus.

7. He will come again in glory

Borg notes that 21 of the 27 New Testament documents mention the second coming of Jesus. Expectations of Jesus return have been mentioned for centuries since Jesus death. Not surprisingly, Borg does not expect a physical return to earth, instead he focuses on Jesus coming in a symbolic and spiritual sense, which is in the forefront during the advent season.

Wright has argued that “the son of man coming in the clouds” represents exaltation instead of a return. He also comments on eternal life as a reference to “the life of the age to come” as the sense of the term in first century Jewish usage. He advises that the concept of heaven has been misunderstood—it isn’t a place in the cosmos or a destination in time but a “dimension” of God’s reality. The English word “coming” as a translation for the Greek parousia refers to presence as in a royal presence thus Jesus being present is his coming amongst us and as part of God’s new creation.

8. Jesus and the Christian life

Wright presents the Christian life as one of worship and mission. In this chapter he writes about spirituality, theology, politics, and healing. Being spiritual involves prayer, meditation, contemplation, and “spiritual reading.” The focus of Christian theology is to know God in Jesus. When it comes to politics, he is not a fan of politicians who speak about family values. He takes the larger view that from a Christian perspective we must focus on the kingdom of God. Jesus, rather than Caesar, is Lord. Wright sees healing as a multidimensional concept that includes physical and psychological healing and extends beyond the person to society.

Borg’s view of the Christian life is based on the relationship between Christians and God in contrast to expressing agreement with a set of beliefs. This relationship is mediated through Scripture and tradition and involves being transformed in our relationships with others. He contrasts this relational faith to an older understanding of Christianity as “literalistic, doctrinal, moralistic, exclusivistic, and afterlife oriented.”

Comments on The Meaning of Jesus

Overall, I found The Meaning of Jesus an interesting read and suitable for a small group discussion amongst readers seeking a better understanding of what means to be a Christian in the sense of one who follows Jesus’ way. Both authors are Christians, historians, and prolific authors. They write well and have a good sense of audience. I think Borg explains theological concepts more clearly than does Wright. In addition, Borg provides historical evidence or reasons in a clearer manner than does Wright.

For the most part, I think readers will find a clear choice between the traditional views of Jesus provided by Wright and the nuanced perspective of Borg. Although Wright presents traditional Christian views he makes a point of not supporting fundamentalist and literalist perspectives on the biblical texts. He believes in miracles, acts of healing, and the virgin conception. Wright is more accepting of the gospel reports of events as historical events rather than as metaphorical narratives but does not exclude considering some church doctrines as a misreading of metaphorical understandings among the Jews who were the first Christians receiving the original gospels and other New Testament texts.

Borg offers examples of gospel stories that appear more like stories written by those in the early church who looked back on the life of Jesus and interpreted the events, or created stories, based on their memories, their understanding of their Scriptures, and the use of metaphorical language. Both writers remind readers that Jesus was an observant Jew who understood the Hebrew Scriptures and spoke to the people of his time with reference to the Scriptures and the sociopolitical forces of the day.

Borg does a better job of presenting perspectives on what it means to think of a biblical teaching or story as true. He clarifies truth in terms of facts that could be viewed if a video recording was made versus the truth that comes from understanding the meaning of a story or metaphor. An example of this notion of truth can be seen in one of his illustrations. Although most readers will clearly see that “I am the door” is a metaphor, fewer modern Christian readers view the analogous phrase, “Jesus is the son of God” as a metaphor.

I appreciate how the authors deal with the difficulties in understanding first century perspectives on various key doctrines and variations in the texts from different New Testament authors. They both seem keenly aware of the difficulties in  distinguishing between historical facts and metaphorical language. In my view, both authors fail to consider the important role of human cognition when it comes to appreciating history remembered. This omission is in contrast to the work of evangelical scholar Craig Keener in his study of Christobiography, which acknowledges memory factors in the gospels and would enrich an understanding of the texts beyond the consideration of metaphors.

Both writers offer helpful comments to those of us who never attended a Bible College or Seminary. So, I found the book helpful in gaining a better understanding of Jesus’ life as a first century Jew living under Roman occupation and the meaning of several concepts that have been perceived differently by many contemporary Christian groups.

The Meaning of Jesus on AMAZON on GOOGLE

Links to the authors