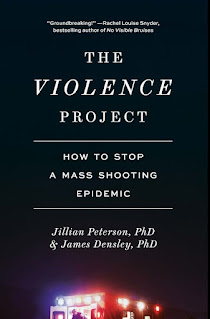 How to Stop A

Now that Covid-19 isolation is over, mass shootings have resumed. Most of the time, mass shootings command the top spot on the evening news. By now the sequence of covering the crime scene is familiar—too familiar.

Jillian Peterson and James Densley have studied mass shootings for several years. They’ve built a data base and interviewed killers, survivors, and family members of victims and killers. The Violence Project tells the story of mass murder and offers ideas and resources that might help some of us prevent the next major event. In fact, they also tell stories of avoided shootings and some that could have been avoided if policies or laws were closely followed. Although the authors mention some shootings outside the US, their focus is on America where 85% of the US killers were born and raised.

TRAUMA. Before suggesting ideas that may help avert future disasters and helpful resources, the authors introduce us to a mass of data to help us understand the characteristics that some killers have in common. They also explain the significant roles of life events in the lives of many mass shooters. Trauma is one such event. Almost 70% of the mass shooters in schools had a history of childhood trauma and they killed more people than shooters who did not have trauma.

and they killed more people than shooters who did not have trauma.

CRISIS is another key concept—80% of the mass shooters in their database were in a state of crisis close in time to the lethal event. For one example, 50% of all their mass shooters had an employment problem (e.g., reprimand, suspension, fired) close in time to their shooting. And about 25% experienced the end of a relationship before their shooting. Awareness of the murder-suicide connection is important. Recognizing and helping or obtaining help for people in a suicidal crisis can be relevant to preventing shootings. See page 56 for a useful table of signs of a crisis.

80% of the mass shooters in their database

were in a state of crisis close in time to the lethal event.

Among the young shooters (age 20 and below),

86% had leaked their plans before the shooting.

SOCIAL PROOF is a factor in shooters deciding to act. Robert Cialdini referred to social proof in his book on Influence. Social proof refers to the process of looking at the beliefs and actions of others as guidance in what to believe and how to act. A number of shooters had studied the Columbine High School massacre. In this context, the authors comment on the active shooter drills experienced by American students and staff. Because many school shooters are or were students at the schools where they committed their atrocities, the authors suggest the drills helped the shooters learn how the school would respond—they were “rehearsing for the act.”

THE HATE FACTOR is illustrated by crimes against religious and racial or ethnic minorities. Other acts of hatred appear as responses to rejection. In this context, the authors discuss the backfire effect, which describes the relative ineffectiveness of efforts to correct misperceptions.

OPPORTUNITY. In the opportunity chapter, the authors present a somewhat familiar set of data about the availability of guns and gun violence. It’s not a simplistic set of statistics that would make eyes glaze. Instead, they offer examples of the various ways killers got their weapons and suggest how small interventions may have prevented lost lives.

ACTION. What you can do to stop the violence.

The authors appropriately close their book with a summary and concrete efforts readers can take to help with the “mass shooting epidemic.” These are grouped in four categories with ideas for individuals, institutions, and society. Basic skills will help identify and take action when encountering people who have suffered trauma or appear to be in crisis. Monitoring efforts to seek social proof is a third action. And limiting opportunity by safe storage of firearms and speaking out when learning about potential shootings is a fourth category of prevention.

In the afterword, readers will find a list of resources such as websites and hotlines addressing the topics in the book.

It’s hard to know how much of a difference The Violence Project might make in saving lives. The effectiveness of prevention efforts are notoriously difficult to document compared to treatment. Nevertheless, the authors have provided a reasonable set of evidence to support their ideas. In addition, they have an online website with additional resources. Given the history of mass shootings, the book will remain timely for years to come.