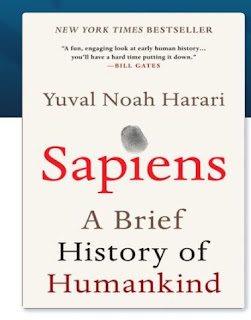 A Brief History of

Sapiens has been reviewed many times since its international debut. So, I’ll just provide a summary and some thoughts from my perspective as a psychologist.

Despite its long reach—all of human history—it’s a relatively quick read because Harari is an engaging writer with a sense of humor and a knack for telling stories that create vivid images of our species wandering about on various continental stages for some 200,000 years. He reviews world history from a global perspective beginning with evolution. There’s not a lot new here for those of us who read similar works. Nevertheless, there were things I did not know and so I am grateful for those tidbits, which may only amount to “wow” trivia if I can remember them.

His subtitle, A Brief History,” provides the clue for what to expect. Harari takes us through history from the speculative beginning to current events. He organizes history into four units having approximately an equal number of chapters—20 altogether.

We grow into creatures with powerful brains—The Cognitive Revolution. We settle down and build in the Agricultural Revolution. Various factors like money and religion help bring people together into megagroups—The Unification of Humankind. Finally, The Scientific Revolution thrusts humans forward with considerable energy that leaves us wondering, what is progress, happiness, and the meaning of life.

I cannot speak to all the disciplines Harari draws on to describe one era or another. There are two aspects of humanity that I have studied more than others—human nature and religion.

I’m wary about making claims about our current behavior patterns linked to supposed evolutionary adaptations to hunting and gathering life on the savannah tens of thousands of years ago. It’s not that I deny evolution its just that so much of human behavior varies greatly within our cultures. Also, in the trek from one revolution to another I’m not always sure about the causes for change despite the evidence that significant changes occurred. I don’t mind reading about ideas but I would prefer they be tempered by a humble stance.

“There are no gods in the universe, no nations, no money, no human rights, no laws, and no justice outside the common imagination of human beings.”

One critical aspect of the drama of human nature that’s missing is a consideration of the role of human emotions in motivating human behavior related to major historical events. Harari emphasizes cognition in the beginning and refers to happiness near the end of this work. But there is no entry in the index for such life-changing expressions of anger or rage (e.g., Potegal & Novaco, 2010), jealousy (e.g., Hart & Legerstree, 2010) , or revenge (e.g., Price, 2009).

The second area that strikes me as shallow is his assumptions about religion. Others have noticed this too. How people formed religions and how religions function has been of considerable interest to psychologists for about a century ever since William James’ seminal work. Of course, there are considerable contributions from related disciplines like sociology, anthropology, history, and religious studies. I don’t deny the importance of religion to culture and the regulation of society but Harari’s definition doesn’t fit the view I share with psychologists that religion has a lot to do with a meaningful life and offers positive and negative coping strategies when confronting life’s conundrums (e.g., see Paloutzian & Parks, 2013. I realize Harari is an atheist but that does not mean he is exempt thinking more deeply about the role of religion in human experience.

Sapiens offers a quick and well-written introduction to world history for those who haven’t had a course in a long time or have more than a passing interest in the major activities that occupied our species for thousands of years. It likely won’t satisfy those wanting a more in-depth analysis of historic trends.

Harari will also stimulate some thinking about the importance of such matters as scientific discoveries, economics, religion, and other major factors affecting our lives. I suggest approaching Sapiens as a scientist looking for interesting ideas that can be tested by gathering more evidence elsewhere.