Elizebeth The Code Smasher – A Review 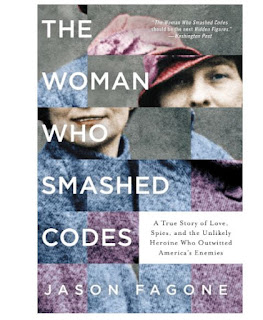 The Woman Who Smashed Codes

A True Story of Love, Spies,
and the Unlikely Heroine Who Outwitted America's Enemies

Elizebeth Smith (1892-1980) is the woman who smashed the codes of Nazis in World War II. Her story, told by Jason Fagone, reads like one of the best mystery novels. I recommend The Woman Who Smashed Codes to anyone interested in the contribution of women to science and democracy. And to anyone interested in the intriguing world of spies, the foundations of Western intelligence agencies, or World War II.

Elizebeth (spelt with an “e” not an “a”) was often overshadowed by her high profile husband, William Friedman, the dean of American Cryptology. Elizebeth is an American Hero--this book tells her story.

Elizebeth Smith of Huntington Indiana began her professional career as a Quaker schoolteacher. She, and her husband to be, were hired by the wealthy supporter of scientific investigations, George Fabyan to work at Riverbank Laboratories on suspected hidden messages by Francis Bacon in the works of William Shakespeare. Elizebeth and William worked together, married, and moved on from the Shakespeare project to establish a Department of Codes and Ciphers, which contracted with the US government to crack World War I messages.

After the couple left Riverbank, Elizebeth cracked smuggler’s codes during the prohibition era. She headed the unit at the Coast Guard, which became part of the US Navy. Her unit was responsible for breaking the codes of the expanding Nazi network in South America. Her department later coordinated work with the British efforts at Bletchley Park.

The couple raised two children. After the war, Elizebeth spent many years caring for her husband who struggled with depression and a series of heart attacks. He died in 1969 and was buried at Arlington National Cemetery. She lived to age 88 and died in New Jersey. Her ashes were taken to her husband’s grave.

A Woman of No Importance