Metaphors to Live By - Reading the Bible by Marcus Borg 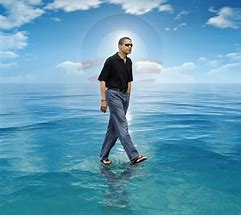 A Review of Marcus Borg’s

Reading the Bible Again for the First Time:

Taking the Bible Seriously but Not literally.

My earliest memory of a conflict between the Bible and the observable world happened sometime in late childhood when I learned that the moon was not a light as it plainly said in my King James Version of Genesis 1:16. It was downhill from there. Like many of my friends, we learned a near literal interpretation of the Bible from parents with a limited education and churches where teachers shared a blend of fundamentalism and evangelicalism. Their application of select biblical laws, commandments, and rules to contemporary life seemed strangely arbitrary and unnecessarily restrictive. I should like to think Marcus Borg’s, Reading the Bible Again for the First Time, would have saved me considerable puzzlement—and likely some distress. I’ll say more later but first, a summary of Reading the Bible Again for the First Time.

*****
Borg establishes the conflict in the preface. Christians are faced with two very different ways of reading the sacred text, that is, The Holy Bible. Many of us learned the “literal-factual” way. Borg offers us a “historical-metaphorical” way. The two different ways of reading the text divide Christians not just in churches but in the public arena of American politics.

Borg divides his highly readable volume into three parts. In Part One, he provides a foundation for reading the Bible in this new way. We learn a little history of the Bible, which of course was not read by ordinary folks until people learned to read and the text became widely available. A near literalism combined with church doctrines was taught for centuries with a focus on salvation from sin and living a moral life so, in the end, you had heaven to gain. Now Borg introduces readers to the alternative view that our sacred text reveals a variety of ways people understood God and their relationship to God., Borg closes Part One by explaining what he means by the “historical-metaphorical” way of reading the Bible. Readers need to understand the historical context to appreciate how ancient Hebrews expressed their faith, but we would be left with a rather dead text if we ignored the beauty of the metaphors in play from Genesis to Revelation. In Borg’s words: “Metaphor is linguistic art or verbal art” (Location 569).

In Part Two we learn how the Hebrew Bible (Old Testament for Christians) comes alive when we don’t have to worry about the days or sequences of creation, which of 613 laws ought to be kept, or how to make sense of the horrible ways ancient people destroyed each other in the name of God. Here, I cannot do justice to Borg’s text in a typical review because he gives numerous examples of how contemporary readers can learn that the problems of yesteryear continue to trouble us today. Then, as now, ordinary people suffered from economic exploitation by taxes and the possession of land, political oppression by kings and emperors, and religious legitimation—a nation’s leaders dictate what God ordains. Along the way, we gain insights into how to read poetry and the wisdom literature such as is found in the proverbs. We also learn how prophets challenged kings. And we glimpse how people celebrated their relationship with God.

If you are familiar with the Bible, you won’t be surprised to learn that Part Three is about the New Testament. In three chapters, Borg summarizes how the Gospels, letters of Paul, and The Revelation can also be read in their historical context along with an appreciation of the rich metaphors that can transcend 20 centuries. He reminds us that Jesus, his followers, and all, or almost all, the writers were Jewish men thus, we learn of the importance of understanding the problem of first century Jews under the sandal of the Roman Empire and the necessity of appreciating the influence of Jewish traditions on the stories of Jesus and the metaphors of the writers. Borg is not rigid as he interprets the text. I suppose some might believe if they had enough faith, they could walk on water, but the story as metaphor suggests more than one meaning. We might learn that people with spiritual sight learn to calm their inner fears or cope with the struggles of life. I should say, these interpretations are my own thoughts as a psychologist reading Borg’s discussion of God vs. the traditional theme of angry seas, which in the gospel story were calmed by Jesus.

Paul is a problematic author for many a modern Christian—especially American women who don’t find much support in doctrines of submission, silence, and guidance on what to wear (or not wear). As others have said, we can take the edge off Paul a bit if we realize some of the texts limiting women’s roles were likely not written by Paul. And, Paul wrote most of his letters as a reply to specific questions that arose in the various Christian communities he founded or supported during his travels. We gain a bit more insight into Paul’s theology when we unpack his recurring themes of freedom and transformation developed from his Damascus Road experience. The way of becoming a new person, like the way lived out by Jesus, is a path of dying to an old way and rising to embrace a new way. In his day and now, people like Paul may be transformed following an encounter with Jesus.

Fittingly, the Revelation is at the end of the Bible, at the end of Borg’s book, and for many, a mysterious End Times story. Long ago I learned that wall charts describing the end of life as we know it lacked credibility. I suppose those complex flow charts are in someone’s attic gathering dust. But I digress. Borg offers nonscholars a brief history of the difficulty of life under the Roman Empire of the first century—a time when those under Roman domination were to worship Caesar as god. Borg provides an orderly and masterful summary of Revelation along with guidance to help readers appreciate the how the vivid images relate to Hebrew history and life under Roman rule. Borg’s interpretation is in sharp contrast to futuristic interpretations that continue to scare some contemporary Christian youth while comforting the elderly with the confidence that they are on the winning side in the massive end-of-world bloody war over evil.

In the Epilogue, Borg reiterates his point about the Bible containing different voices and encourages us to see the ancient conflicts between kings and prophets—between elite leaders who use their positions to oppress and exploit ordinary people and the voices of those who speak against injustice. He also encourages readers to think of Christianity as being about more than a list of beliefs and practices. Christianity is about relationships—relating to God and others with passion and compassion.

*****
I suppose Reading the Bible Again is for any Christian who finds that the clergy and teachers in their faith tradition seem disconnected from their life experience in the way they preach, teach, or blog about living in our complex world. For different reasons, many of us discovered that near literal interpretations of the Bible don’t make sense. Each generation of Christian youth since the 1960s has different reasons for challenging simplistic applications or applications that seem cruel and contradictory if we are to believe God is a loving and caring being.

In the 1960s, those raised in American holiness traditions discovered the arbitrariness of rules against dancing, mixed swimming, long hair on men, tattoos, make-up, movies, jewelry, women wearing pants instead of dresses, and many other quotable prohibitions from some part of God’s Word. Not surprisingly, some, left Christianity behind. Others moved on to churches that were more concerned with doing good than trying to live according to rules made for ancient Israelite tribes or for the Jews and gentiles in early Christian communities.

Ad. You may be interested in A House Divided: Sexuality, Morality, and Christian Cultures A Pickwick Book available from wipfandstock.

Somewhere along the way to the 21st century, educated youth learned to appreciate the scientific explanations for the origin of amazing landscapes and the diversity of life on the planet. We learned so much about birth and death and we benefit from advances in medicine. Slowly, scientists offered more and more explanations relevant to daily life. And many of those scientists happened to be women. Perhaps making matters worse for those insisting on near literal interpretations of the Bible were advances in the behavioral sciences, which upended thinking about mental health, sexuality, and people who experienced hallucinations and delusions. Christians turned away from clergy to find answers to life problems in the offices of physicians, psychologists, and a host of other professionals who offered evidence-based treatments for infertility, contagious diseases, anxiety, depression, schizophrenia, and more.

Moreover, in recent decades, a cacophony of evangelical voices seem at odds with one another over biblical perspectives on the role of women in the church and society, birth control, sex education, the nature of marriage, parenting, abortion, same-sex relationships, and the allocation of church and social resources to help the poor of one’s own nation as well as the world. Of recent concern has been the strident rhetoric used by politically active American Christians to condemn those who do not share their political views.

I think there may be another value of this book to all those who work with Christians who find themselves distressed because of some application of the Bible to their life. They may feel guilty, angry with God, or conflicted over biblical teaching regarding some past or planned act. On the one hand, such people may find helpful guidance from their local clergy. On the other hand, they may consult a mental health professional hoping to find a different opinion. Caution is in order here because a person’s faith can be a significant part of personal identity. However, clinicians of any faith or no faith will likely find Borg’s work instructive for understanding Christians.

Reading the Bible Again is for all those who wish there was another way to embrace the sacred text of their childhood without compromising the facts about the natural world, their intelligence, and respect for all people regardless of their natal sex. Borg doesn’t have all the answers, but he does offer an alternative way of respecting the Bible again and, more importantly, reconnecting with the God who has inspired people for thousands of years to champion the causes of the downtrodden, sick, poor, and social outcasts.

*****
Borg stated there are only two ways to read the texts. And I think he’s right. The near literalist view continues to dominate conservative evangelical churches and the postings of their adherents on social media sites. Those educated evangelicals who try to mix some literalism with some metaphors end up with an unsatisfactory concoction, which can only lead to intelligent young people throwing up their metaphorical hands and walking away.

The time has come to follow Jesus’ lead. Like his rule about the Sabbath Day, old rules were meant for an ancient society, the Sabbath was made for man. If you try to put new wine into old wine skins, they will burst. Being free in Christ means finding out what it means to love God by loving others in one’s sphere of life. Christians live out Paul’s theme of dying to oneself and rising again when engaged in life-enhancing pursuits for the wellbeing of those around us.

As Borg’s subtitle reads, Christians can “take the Bible seriously but not literally.”

If interested, please join me. I write about psychology and culture—especially topics related to the Psychology of Religion and Positive Psychology.