The Wisdom of Crowds- A Book Review by Sutton 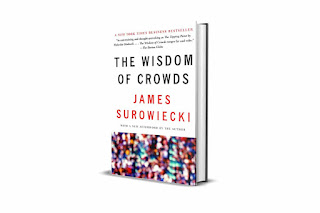 THE WISDOM OF CROWDS

The next time you are part of a large group or crowd, have a look around. Would you trust
them to make a wise decision on your behalf? How about guessing the weight of an ox after it
has been slaughtered and dressed?
James Surowiecki, staff writer for The New Yorker, begins his foray into collective intelligence by taking us back to century old findings by Sir Francis Galton. The crowd of 787 that Galton
observed weighed in with an average ox weight guess of 1,197 pounds. The actual weight was 1,198. Not bad!
Surowiecki’s thesis is that under certain conditions,
a crowd is smarter than an individual is.
The author divided the book into two parts. In the first part, readers will learn three types of
problems that appear amenable to solutions by the wisdom of crowds followed by four important conditions. Part two contains examples of situations where collective wisdom has made a difference. There is an afterword and an extensive notes section but no index.


The Galton story illustrates the value of collective intelligence when solving problems of cognition. Perhaps you recall the Challenger explosion of 28 January, 1986? Within a few minutes, investors bailed out of contractors’ stocks that could be associated with the disaster. One stock stood out from the rest, Martin Thiokel. The other firms were down but not nearly so
much. There were so many sellers that the exchange halted trading. Six months later the Oring seals made by Thiokel were implicated in the accident. Follow-up studies noted no insider trading.
The author provides other examples of good decisions derived from group behavior. “Just follow the crowd,” is a mantra many use when finding their way to a sports event or party. It turns out that problems of coordination are solved by crowds on a regular basis. heading for
the exits after morning worship, choosing a route to a favorite restaurant, or negotiating city sidewalks are coordination problems.
A third problem is one of cooperation. What was surprising following the Greensburg tornado disaster of 4 May, 2007 was how few lives were lost. As soon as the tornado had destroyed every house in town, people were milling about in the dark as they systematically searched for survivors. Secular and religious rescue teams were soon on site with food, water, and other necessities.
Drawing on behavioral science research, Surowiecki identifies four conditions important to successful group outcomes. First, there needs to be a diversity of opinions presented. This is not always pleasant; however, the group-think effect will eliminate the value of input into group problem-solving unless a multiplicity of ideas can be generated. Second, people need to proffer their opinions independently. Putting forward a consensus opinion subtracts value.
Third, decentralization is important so that people with various areas of expertise are part of the total group presenting opinions. Finally, there needs to be a way of aggregating the information. In the past, collecting and organizing a vast array of opinions would have been incredibly time consuming. Fortunately, web-based input and google-like algorithms can produce quick and efficient collation of group data in rank order.
Part two seemed less dynamic to me. After reading the principles and enjoying the wow-factor examples, the organizational case studies seemed a bit tedious and caused me to think
more clearly about factors other than crowd wisdom that might explain the outcomes. In fairness, field research is always a bit messy compared to lab-based studies with college sophomores.
Readers interested in social behavior will find the book an interesting stimulus to consider
how to tap the opinions of people in their groups and organizations. Others may enjoy
replicating some of the findings in their labs or life experience. Most readers are likely part of professional organizations and religious groups that purport to value their constituents. Given the opportunities to quickly aggregate data via the internet, what might it look like if important decisions were made, based primarily on the independent views of the populace rather than the more typical consensus-driven governing boards? Should organizations spend more time observing what people actually do rather than striving to persuade the crowd to choose another way? For example, many American churches have adjusted their schedules to accommodate Super Bowl Sunday.
On another level, can we trust the crowd to make wise decisions in moral matters? Are the historical examples of crowds choosing to follow leaders in destructive acts representative of the impaired wisdom of crowds? We may also ask if indeed the four conditions are necessary for crowds to make wise decisions, then why are crowds not wise enough to create such conditions?
BUY The Wisdom of Crowds
Perhaps the usual scientist disclaimer is in order, more research is needed. You might like to know that the collective wisdom of the world suggests that religion is important. That is, based on data collected by the New York Times Almanac staff, 74% of the world’s billions are members of one of the four largest religions (Christianity, Islam, Hinduism, Buddhism; Wright, 2007).
Watch a video on The Power of the Collective by James Surowiecki