WHITE FRAGILITY: Why It’s So Hard for White People to Talk About Racism 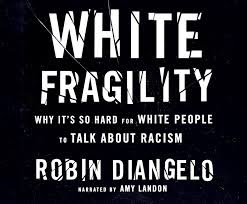 White Fragility is a best seller with a surge in interest during this 2020 springtime of protests against racism. The concept, white fragility, is now a part of everyday discourse—at least among those who endorse the concept. Even if you disagree with most or all of DiAngelo’s ideas, I think it worth reading or listening to if you live in, or are part of, the world where white people are, or were, oppressive in their actions toward black people.

I listened to the AUDIBLE version on a trial.

The path to white fragility in America begins a few centuries ago. DiAngelo does not dwell on the past but draws back the curtain on the historic wasteland so we have a context.

“Claiming that the past was socially better than the present is also a hallmark of white supremacy. Consider any period in the past from the perspective of people of color: 246 years of brutal enslavement; the rape of black women for the pleasure of white men and to produce more enslaved workers; the selling off of black children; the attempted genocide of Indigenous people, Indian removal acts, and reservations; indentured servitude, lynching, and mob violence; sharecropping; Chinese exclusion laws; Japanese American internment; Jim Crow laws of mandatory segregation; black codes; bans on black jury service; bans on voting; imprisoning people for unpaid work; medical sterilization and experimentation; employment discrimination; educational discrimination; inferior schools; biased laws and policing practices; redlining and subprime mortgages; mass incarceration; racist media representations; cultural erasures, attacks, and mockery; and untold and perverted historical accounts, and you can see how a romanticized past is strictly a white construct. But it is a powerful construct because it calls out to a deeply internalized sense of superiority and entitlement and the sense that any advancement for people of color is an encroachment on this entitlement.”

Naturally, DiAngelo focuses on racism in America. She’s consulted with various companies and organizations and tells tales about how white people demonstrate their fragility—crying, denying, expressing anger, and so forth. Psychologists understand tears can be a way of escaping responsibility. DiAngelo knows that too.

“Tears that are driven by white guilt are self-indulgent. When we are mired in guilt, we are narcissistic and ineffective; guilt functions as an excuse for inaction. Further, because we so seldom have authentic and sustained cross-racial relationships, our tears do not feel like solidarity to people of color we have not previously supported. Instead, our tears function as impotent reflexes that don’t lead to constructive action. We need to reflect on when we cry and when we don’t, and why. In other words, what does it take to move us? Since many of us have not learned how racism works and our role in it, our tears may come from shock and distress about what we didn’t know or recognize. For people of color, our tears demonstrate our racial insulation and privilege.”

Can immigrants like me escape? No. She tells the story of a European who claimed to have grown up in a nonracist society. She’s angry when DiAngelo confronts her. I think DiAngelo is right on two counts. First, European nations, like my own, participated in the American slave trade and racist empire building. Second, after being in the US a while, it is easy to slip into the way society operates. Racism is systemic.

I consider myself to be socially progressive. But that concept has little meaning unless the features are detailed. What I mean to say is I favour equality of opportunity for all and I believe we have a responsibility to promote this type of equality, which includes being antiracist. The trap, as I understand DiAngelo, is thinking we progressives are superior to other whites because we smugly and inaccurately believe we understand the black experience and promote ourselves rather than continuing the struggle against racism. Here’s what DiAngelo says about progressives:

“White progressives can be the most difficult for people of color because, to the degree that we think we have arrived, we will put our energy into making sure that others see us as having arrived. None of our energy will go into what we need to be doing for the rest of our lives: engaging in ongoing self-awareness, continuing education, relationship building, and actual antiracist practice. White progressives do indeed uphold and perpetrate racism, but our defensiveness and certitude make it virtually impossible to explain to us how we do so.”

Sometimes DiAngelo comes across as harsh as if she needs to hit some whites over the head. At other times she reveals a humility such as the time she made a racist comment about a black colleague’s braided hair and needed to apologize.

DiAngelo is at her best when she tells stories to illustrate important points like receiving feedback from people of colour.

“In my workshops, I often ask people of color, “How often have you given white people feedback on our unaware yet inevitable racism? How often has that gone well for you?” Eye-rolling, head-shaking, and outright laughter follow, along with the consensus of rarely, if ever. I then ask, “What would it be like if you could simply give us feedback, have us graciously receive it, reflect, and work to change that behavior?” Recently a man of color sighed and said, “It would be revolutionary.” I ask my fellow whites to consider the profundity of that response. It would be revolutionary if we could receive, reflect, and work to change the behavior. On the one hand, the man’s response points to how difficult and fragile we are. But on the other hand, it indicates how simple it can be to take responsibility for our racism. However, we aren’t likely to get there if we are operating from the dominant worldview that only intentionally mean people can participate in racism.”

White Fragility can feel depressing because she gives us white people the sense that we cannot escape our dilemma. The system built by white founders looms large and insidious. She does offer some examples of how to develop an antiracist stance through education, listening, and accepting feedback.

DiAngelo approaches her project like an apostle writing a gospel that cannot be challenged unless you want to be identified as a heretic and burned for eternity. However, she has an important point. We white people are people of privilege in the United States. That’s been clear for some time, but DiAngelo does offer additional examples of how that privilege has become covert in the wake of various laws and policies designed to address overt discrimination in employment, housing, and the like. Racism continues to exist and it can be difficult to recognize. Hence the need for books like White Fragility.

See also the Color of Compromise

What DiAngelo misses is a critical perspective on her all-encompassing concept of white fragility. In her black-white view of American culture she misses important nuances that can evoke a rejection of the very goal she wishes to accomplish. She’s on message when she talks about white-black racist language. But she sometimes switches the conversation to write about people of colour. On the one hand, some of the attitudes and actions of white Americans toward people of colour are similar, but on the other hand, white oppression toward the descendants of American slaves is different than the oppression of Native Americans, people of colour from south of the border, and people from other ethnic groups. And we should not ignore the complexity of racism and sexism as seen in the tension between white women and black women in pursuit of the right to vote (See PBS).

Another criticism is the fuzziness of the white fragility diagnosis. It’s like a disease every white person has. This is not unlike new clinicians who attend a workshop on ADHD and go away discovering everyone has ADHD and needs the latest medication touted by the omnipresent pharma-giants. To be sure, the concept of white fragility is somewhat useful, but it is not like a disease that one has or does not have.

White fragility is more like a hedge of thorny vines protecting the historic domains of whites who forced people of colour to proceed carefully as they attempt to find the way toward the promise of America that all have unalienable rights of life, liberty, and the pursuit of happiness.

In my view, we white Americans would be better off identifying and cutting the overgrowth of these racist vines and creating one broad path to equality. Each thorny vine is a behaviour pattern that when identified can be viewed on a sliding scale to assess where we are in making progress toward antiracist thoughts, feelings, verbal statements, and nonverbal behaviour. We can evaluate the possibility that we are in denial or avoiding an uncomfortable truth. We can learn how to apologize, seek forgiveness, attempt reconciliation, and take action to remove a thorny vine or create an inclusive pathway.

My last criticism is that the concept White Fragility is an offensive an errant concept not likely to win converts from those most likely in need of confronting their racial prejudices and listening to the ways whites have oppressed people of colour. DiAngelo's message is often on-point. Perhaps the title will sell many books to moderate and left-leaning Americans. The white leaders who hold the power to create America's laws, the military power to destroy the planet, and the financial wealth to own large swathes of the globe hardly seem fragile to me. But many of them, and we less powerful whites, do need to confront our racist attitudes and policies and exert whatever influence we have to create a more equitable and just society if not because we feel a moral obligation to do so, at least from the perspective of enlightened self-interest.

Finally, my experience as a psychotherapist and a consumer of psychological science argues against the value of books alone to change behaviour. If self-help books were so powerful, many of us would be fit, healthy, wealthy, and wise. Nevertheless, White Fragility by Robin DiAngelo is a good read with some useful lessons. It is also an important reminder that those of us in the majority have a responsibility to weed out the thorns that choke the flourishing of so many.