Why I am not a Christian - Bertrand Russell - A book Review

Why I Am Not A 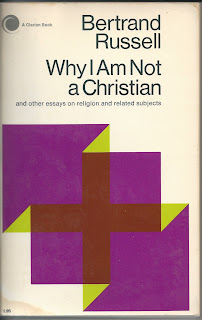 I am still surprised by the memory of a professor at a highly conservative college who included Russell’s book, Why I am not a Christian as assigned reading in a Philosophy of Christianity class. I don’t recall what the professor said about the collection of essays so many years ago. However, it is a classic work and deserves at least a look by those like me interested in the psychology of religion and related fields like philosophy.

The lead essay answers the author’s question in the title. It was presented as a lecture at the Battersea Town Hall (London, England) in 1927. His logical thinking is evident early on as he attempts to define the concept, Christian. He considers a few options and concludes first, that a Christian must believe in God and immortality, and second, a Christian must at least think of Christ as the “best and wisest of men.” The essay proceeds to explain why he does not believe these two attributes are true.

In the section about the existence of God, Russell reviews the traditional arguments are not very convincing. The arguments and problems are well known to philosophy and theology students, so I won’t repeat them here. I am referring to arguments known as “First Cause,” “Natural Law,” “Argument from Design,” and the moral arguments.

His comments on Christ are different. He takes the words of Christ reported in the gospels quite literally. He notes some of the positive teachings of Jesus and notes the lack of following these teachings by Christians. In a different approach, Russell challenges some statements such as the immanent return of Christ which has not happened. A challenging section is his opinion that Christianity is a religion built on fear.

The rest of the book is a collection of essays on various topics related to Christianity or religion in general. These include his views on life after death, sexual ethics, and freedom.

Nearly 100 years later, the arguments put forth by intelligent writers like Russell are familiar. Perhaps what made Russell’s work seem relevant to my philosophy professor was the fact that Russell focused on Christianity in a way that raises issues that an intelligent believer ought to either have satisfactory answers or give up their faith. However, in the years since I took that course, intelligent Christians have taken a different path to dealing with the problems of belief.

On the one hand, fundamentalists continue to uphold traditional beliefs to the point of denying scientific evidence or identifying one conundrum or another as a “mystery” that will be resolved someday—presumably in a literal heaven. Thus, the attacks of atheists seem to make sense only when challenging literal interpretations of old beliefs that seem implausible or lack adequate defenses (I am using adequate in these sense of logical arguments based on some sort of premises that all arguers can agree upon).

On the other hand, other Christians have de-emphasized belief statements, qua truth statements, in favor of experience and offered many metaphorical interpretations of religious claims that appear fantastic from the perspective of a contemporary understanding of human nature and the natural world. In this view, Christ’s calls to address injustice and pursue peace, kindness, and a moral life justify following Christ.

I chose the path of psychology rather than philosophy. This leads me to wonder if my old professor was dealing with doubts about his ultra conservative tradition, which would not permit him to express any personal doubts in front of students. Critical thinking in that context meant thinking critically about people outside the faith rather than about all subject matter.

Russell, B. (1957). Why I am not a Christian and other essays on religion and related subjects. New York: Clarion.