The Sociopath Next Door- Book Review

The Sociopath Next Door 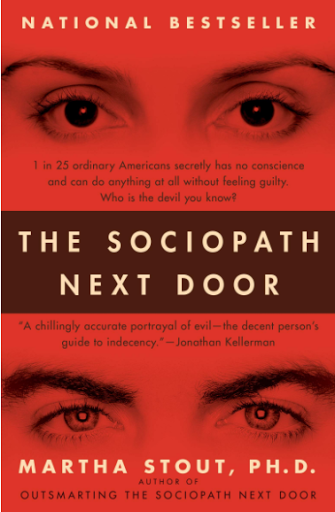 In The Sociopath Next Door, Dr. Martha Stout, psychologist and Harvard Professor, asserts that monsters do not hide in closets or under the bed, but rather in our neighborhoods, businesses, churches, and families. In this 241-page book, Stout draws on over two decades of experience to provide the reader with a manual for identifying and responding to the sociopaths of society. According to Stout, four percent of Americans can do virtually anything without a single trace of remorse; the other 96 percent of us have both the right and responsibility to protect ourselves.

Stout begins by asking the reader to imagine what it would be like to live without conscience, to have the unique ability of moving through life without emotional attachment to anyone or anything. Fortunately, this is an impossible task for most readers. The introduction provides the reader with a basic but well-researched definition of sociopathy. She clarifies current thinking on the difference between Antisocial Personality Disorder drawn from the Diagnostic and Statistical Manual of Mental Disorders IV and research on psychopathy by noted scientists such as Robert Hare and Hervey Cleckley. Throughout the remainder of the book, Stout weaves tales of people having sociopathic traits with information about the definition, development, and benefits of conscience, characteristics of sociopathy, and ways to protect oneself against the cruelty of those who live without conscience.

Stout describes conscience as the ability to form emotional attachments, and out of those attachments to operate for the benefit of others and not only oneself. Chapter seven, the etiology of sociopathy is examined, with a discussion of nature, nurture, and the influence of the society in which one is born. In chapter nine, Stout presents a theory of how conscience has developed based on evolutionary psychology, Kohlberg’s moral development, and the influences of both gender and culture. Although it initially seems that natural selection would opt out on conscience at the individual level, Stout cites research that suggests altruism may actually protect the transmission of conscience through genetics. After reading some of the stories Stout presents, the reader may begin to question if having no conscience is better than being ruled by its constant naggings. Chapters ten, eleven and twelve address why it is ultimately better to possess conscience than to live without its limitations: the life of a sociopath is one ruled by boredom and eventually the majority of sociopaths end up alone and ruined. Stout concludes that, “One way or another, a life without conscience is a failed life (p. 209).”

For the 96 percent of Americans who are bound by their conscience, encountering the cold-blooded sociopath may be a frightening prospect. They maim and destroy lives without a second thought, but they blend in with chameleon-like expertise. This raises the question of how to identify those among us without conscience. Stout suggests that sociopaths can be identified by their deviant and aggressive behavior in conjunction with a constant manipulation of others’ pity. If people with sociopathic traits can cause conscience-bound individuals to feel pity for them, they can keep those individuals from exposing her for what she truly is. This type of manipulation often causes the conscience-bound to question their own sanity, because we expect people to operate from conscience. Stout argues that we must trust our own intuition when faced with sociopathic behavior, and bar these individuals from our lives.

In chapter eight, Stout presents her thirteen rules for dealing with sociopaths in everyday life, stating, “the best way to protect yourself from a sociopath is to avoid him (p. 160).” The other twelve rules address how to question authority, trust your instincts, and avoid pitying those on whom pity is lost. Quoting from a variety of religious sources, including Christian and Buddhist writings, Stout encourages the reader to value conscience, even if submitting to it occasionally causes distress because such submission creates a bond across humanity.

Readers will find the extensive notes section to be useful for further reading and research. Furthermore, the articles cited represent important authors in the areas of sociopathy and antisocial personality disorder, as well as evolutionary psychology, attachment disorder, and religious theory and thought. The index is a thorough representation of the topics discussed throughout the book, making it simply for the reader to find specific stories and explanations.

Readers may find The Sociopath Next Door useful for a few reasons. It clearly describes sociopathy and identifies the major questions and problems raised by individuals who lack conscience. The issue of sociopathy is an important one for both the psychologist and the person of faith. Neither religion nor psychology has developed a clear response to the sociopathic individuals in our midst.

This review was submitted for publication but never published by the journal.

Allman, J. & Sutton, G. (2021). [Review of the book: The sociopath next door by M. Stout]. SuttonReviews. Retrieved from https://suttonreviews.suttong.com/2021/06/the-sociopath-next-door-book-review.html

The Wisdom of Psychopaths by Kevin Dutton