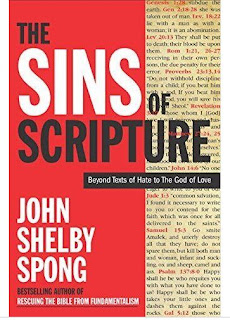 The Sins of Scripture:

The Sins of Scripture continues to be relevant to topics that divide American Christians into two major war camps over such subjects as biblical authority, the equality of women, same-sex relationships, and doctrinal distinctions that mark boundaries of exclusivity.

Spong divides his 32 short chapters into eight sections within 298 pages of a highly readable work. Section 1 is crucial to his discussion of other topics because he challenges the view of some Christians that the Bible is the Word of God although they retain the right to interpret God’s Word in their own way. Like other writers (e.g., Borg, 2001; Enns, 2014), Spong argues against biblical literalism when reading the sacred text of Christianity. He offers problematic examples like ancient perspectives on mental illness and improbable stories like the one about a floating axe-head.

In section 2, Spong attacks the problem of global overpopulation encouraged by Christians who use biblical texts to object to birth control. The title of chapter 6 serves as a conclusion, “Bad Theology Creates Bad Ecology.”

Women are the focus of section 3. Spong traces the history of sexism in the Bible and Christian history. He comments on the texts that point to women as the source of evil and verses concerning women’s blood and purity.

Section 4 addresses homophobia, which continues to divide Christians into affirming and rejecting camps. Spong reviews the familiar Leviticus and Romans texts as well as the misused Sodom story.

Child abuse is the subject of Section 5. Building on a discussion of the trite “Spare the Rod” advice, Spong discusses domestic violence and perceptions of God as a harsh judge who lacks compassion.

Perhaps ironically—since Jesus and his apostles were Jews—Spong examines the Christian roots of antisemitism in the New Testament texts. A fresh look at Judas Iscariot concludes this analysis in section 6.

In Section 7, Spong takes on the notion of exclusivity and argues for a vibrant Christian spirituality that is beyond creeds and demonstrates respect for people of other faiths.

Finally, in section 8, Spong presents an overview of the Bible as a developing epic, which expanded over the centuries as the Jewish tribes became a nation, went into exile, and reshaped their story as they heard from one prophet after another. Christians continue and expand the epic as they begin to see Jesus in this evolving historic context. Spong concludes with his vision of what comes next in this epic story.

Several writers have covered similar topics in an effort to help people better understand the ancient texts in context. The Sins of Scripture will help progressive Christians better understand how their approach to the Bible and the Christian life differs from evangelicals and those who read many sections of the Bible as if God wrote laws to govern today’s society. It’s not the kind of book to gain favor with evangelicals unless they are disenchanted with some of the strident rhetoric.

I think Spong has accurately focused on the battleground issue of how to view the collection of works called the Bible. There is a sharp difference between those who view the Bible as a sacred anthology to be taken seriously but not necessarily literally and those who claim the Bible to be the Word of God as if to discount human authors.

One factor often overlooked by Spong and other authors addressing biblical scholarship is the role of human memory and cognitive biases in creating historical works—especially those written years or decades after people experienced the referenced events. Fortunately, this might be about to change as evangelical scholar Craig Keener recently gave a nod to the work of Elizabeth Loftus in his 2019 commentary on the gospels.

I found the Spong’s book supportive of my efforts in A House Divided. Although I read The Sins of Scripture years after writing A House Divided, Spong’s work generally supports my presentation of progressive perspectives on women and people who identify as LGBTQ+. I would add that the psychology of disgust is an important factor in the difficulties some have with blood and same-sex sex.

Spong, J. S. (2005). The sins of scripture: Exposing the Bible’s texts of hate to reveal the God of love. San Francisco: Harper.  Available on AMAZON   and   GOOGLE

John Shelby “Jack” Spong (1931-1921) was an American bishop in the Episcopal Church. He was the Bishop of Newark, NJ from 1979-2000. Highlights of his life can be found at https://www.episcopalnewsservice.org/2021/09/13/rip-rt-rev-john-shelby-spong-newark-bishop-who-pushed-for-lgbtq-inclusion-dies-at-90/

I am a psychologist who studies and writes about psychology and religion. You can find more of my works, including free articles below.