A Victim, the Killers

and the Nation’s Search for Answers, 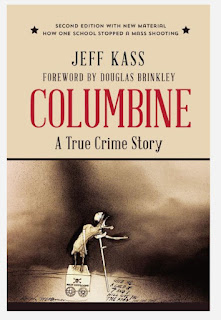 It’s 2022. We’ve heard of several mass shootings this year. Sadly, we know the routine. The news media head to the scene of the massacre. We get early reports from law enforcement. We see heart wrenching images of incredibly sad people near the scene where loved ones have fallen. We learn about the numbers of people killed and injured. We hear the familiar words of political leaders attempting to offer support. We hear about gun control and the need for more security. Sometimes we learn about life-costing mistakes. We see images of flowers and bears at makeshift memorials. We learn about funeral services. And then the images fade until next time.

It was April 20, 1999 when Eric Harris and Dylan Klebold entered Columbine High School. They murdered 12 students and 1 teacher. More were injured—21 of 24 were injured by gunfire. Columbine: A True Crime Story is Kass’s analysis of what happened that tragic day. Kass pursued records from government sources and conducted interviews. He reviewed tapes and has documented vast quantities of information about the history of the killers and their families and friends. We learn a lot about the aftermath so we begin to see the impact on the parents of those whose children died.

Early on, Kass takes us through “Day One”—the day the killers enter the school with guns and bombs. Those like me who saw the story on TV and followed the horrific scenes see the action as if in real time—Kass writes with clarity and skill. The retelling has fresh impact and provides the chilling context for his analysis of events leading up to the fateful day followed by various types of chaos following Day One.

As the backstory unfolds, we begin to see points at which some people were exposed to pieces of information that could have served as a warning of pending doom. Hindsight is tricky. Even more so now that we have additional shootings on record.

I cannot imagine a worst tragedy than the death of a child. If there can be something worse, it may be the chaos after the violence. The quest for answers to “why” did this happen can often be fruitless but it’s made worse when information isn’t forthcoming. I can only imagine the powerful feelings of anger and fear in a community where there’s finger pointing, threats, and lawsuits consuming considerable energy for years. This is the chaos. Even Kass’ investigation can only offer a glimpse at the personal struggles. Life after loss isn’t just about grieving. Sadly, it’s also about fighting battles.

I recommend Columbine: A True Crime Story to those who wish to learn from these tragedies. The learning isn’t just about what might have been missed or what could have been done differently but it’s about connecting with the emotions and experiences of the victims and those involved in some official capacity.

What’s missing, and I do not fault the author, is an appreciation of what survivors experience. Today, those 16 years old have lived another 23 years and seen a lot more school shootings. How have they survived? How did their parents cope? These are additional lessons we as a society and caregivers need to learn. These are the people that may enter our clinics and counseling rooms. Perhaps their physical functioning has been restored but we do not know about their minds.

In closing, I would also recommend a related book, The Violence Project, which draws on a database built on the authors research into years of mass shootings. One thing mentioned by Jeff Kass and the authors of The Violence Project is the common finding of leakage. That is, young killers often reveal parts of their plans to others before the big event.

I am a retired clinical psychologist who provided clinical and forensic services to families, schools, and government agencies.